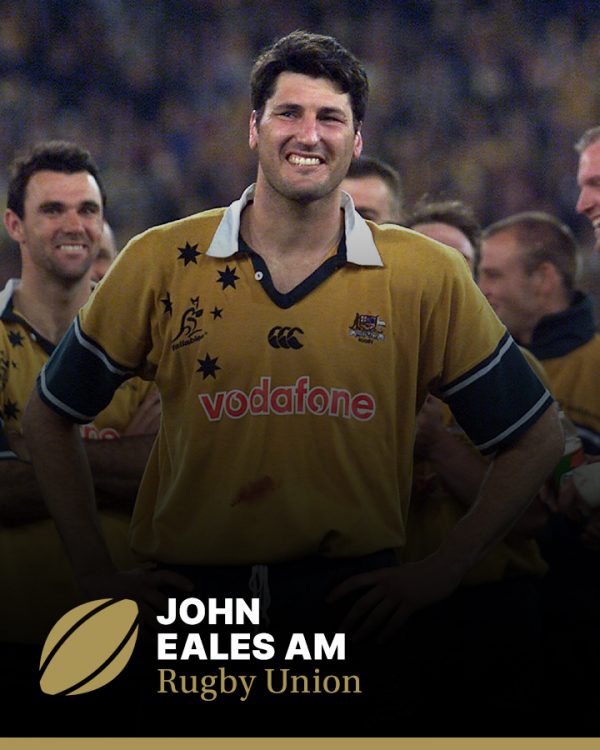 John Eales AM was inducted into the Sport Australia Hall of Fame in December 2003 and was elevated to Legend of Australian Sport in December 2020 for his contribution to the sport of rugby union.

Widely regarded as one of the finest rugby players to represent his country, Eales was Australia’s most capped lock forward with 86 appearances and most capped captain with 55 appearances as skipper. He had also scored more points than any other forward in Australian Test history with a career total of 173. His 86 Test appearances upon his retirement made him the second most capped player in Australian rugby history behind David Campese (101 Tests).

Under his captaincy, the Wallabies became the world’s number one rugby team, while enjoying a reputation as great ambassadors for their country off the field.

Eales possessed everything and more – height, strength, athleticism, technical skills in the lineout and scrum as well as the ability to kick and handle the ball. He was also an inspirational leader and an ideal role model to Australians in all walks of life.

Eales’ career in Test match rugby began in 1991 when he made his debut against Wales at Brisbane’s Ballymore Oval. Later that year he played a key role in Australia’s World Cup final victory over England at Twickenham, in London. The game’s keen observers noted the young lock’s extraordinary athleticism. Over the next ten years, Eales would be consistently rated as the finest lock forward in world rugby.

He became the first Wallaby captain of the professional era, with his side eventually collecting every title and trophy available for them to contest. In 1998 he lifted the Bledisloe Cup as the Wallabies of that year became the first Australian side since 1929 to defeat the New Zealand All Blacks in a three nil clean sweep of the series.

He overcame a serious shoulder injury in 1999, to captain Australia to victory in the Rugby World Cup in Cardiff. Eales had won his second World Cup final, replicating his efforts from 1991. He is one of five Australians to have won the World Cup twice. The others are Australians Dan Crowley, Phil Kearns, Jason Little and Tim Horan.

In 2000, Australia defeated Argentina in a series, retained the Bledisloe Cup, and for the first time, won the Tri Nations Trophy. They also won the inaugural Nelson Mandela Challenge Plate against the Springboks. The Tri Nations Trophy success reflected the unique nature of Eales’ dominance of the game, Australia needed to win the last two matches of that series to take the title. Both matches were played on foreign soil.

In 2001, Eales became the first captain ever to lead Australia in a series victory over the famed British Lions. They came back from a first Test loss, to win the next two against the best players from England, Ireland, Scotland and Wales.

His retirement from rugby in September 2001 marked the end of an era for the Australian game and tributes flooded in from far and wide. Australian Prime Minister John Howard said:

“I wish to record my admiration for the magnificent contribution that John Eales has made to the game of rugby, and to Australian and international sport. John Eales has been an inspirational leader, an outstanding and courageous player, and an example to all in the way he has conducted himself on and off the field”.

In a further salute to Eales, the Australian Rugby Union launched a prestigious award in 2002 to honour the game’s best Wallaby player each season, known as The John Eales Medal.

Following retirement, Eales seamlessly transferred his leadership skills to the corporate world. He was a founding partner of the consultancy Mettle Group, and is Chair of ASX listed Trajan Group Holding and a Director of, Flight Centre Travel Group and Magellan Financial Group. He continues to work as a consultant to other businesses and has also authored a number of books and worked as a columnist for The Australian and the Australian Financial Review.

Eales is noted for his dignity, his respect for standards and his consideration of others.

“… it’s a bit hard to believe. You look around at some of the people who have been here and I certainly feel very humbled and for me, this is a great honour for the family, for myself but it’s also an honour very much so for Rugby because I can tell you, there are people equally if not more deserving than myself who should be here representing Rugby.” – John Eales AM on being elevated to Legend.