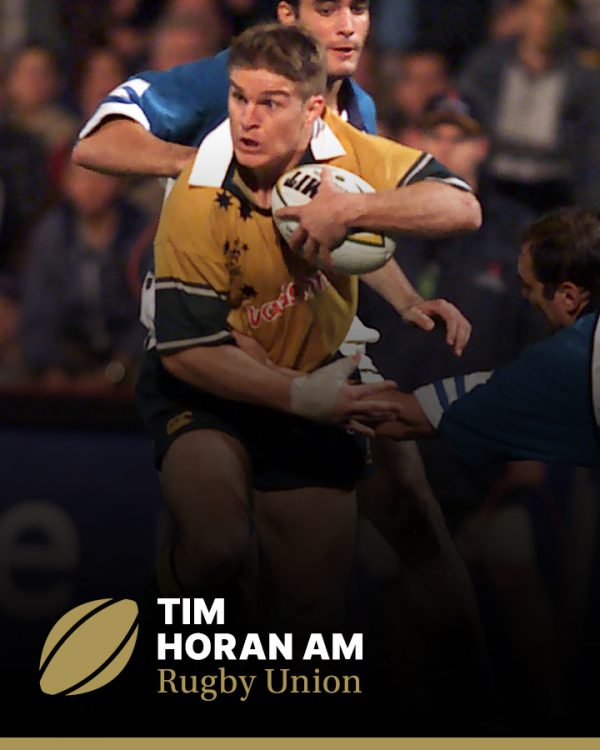 Tim Horan AM was inducted into the Sport Australia Hall of Fame in 2006 as an Athlete Member for his contribution to the sport of rugby union.

Horan is arguably the greatest centre rugby union has ever seen. Electrifying pace, rock-solid defence, an ability to read the play like a book, lethal with ball in hand… he offered it all during his sparkling 11-year Test career with the Wallabies.

Horan initially played rugby league and switched to union while at secondary school. He started playing with the Queensland Reds in the Super 12, before earning his first gold jersey at just 19 against the All Blacks on August 5, 1989. Australia lost that match 24-12 but Horan earned the respect of all, becoming one of the best centres in the world throughout the 90s.

Two years later at the 1991 World Cup, Horan was crucial to the Wallabies success, most notably when he scored from David Campese’s memorable over-the-shoulder, no-look pass in the semi against New Zealand. No try has been given as much replay time since.

1997 saw Horan play his 50th cap, won in a Test against New Zealand in Christchurch, whilst in the next game against England he scored a try to become the sixth Australian player to reach 100 points. He then missed several Tests due to a fractured thumb and was thus spared the horror of a 61-22 Tri-Nations defeat by South Africa. The injury healed in time for the UK tour, and in an otherwise forgettable 15 all draw with England at Twickenham, he gave one of his best ever performances, sending Ben Tune and George Gregan over for a try apiece.

In 1998 Australia showed renewed determination in their effort to return to world class status and began the year with a spectacular 76-0 drubbing of England, a game in which he bagged two tries. He then helped the Aussies to a 3-0 win in the Bledisloe Cup, though they were denied a first ever Tri-Nations title by South Africa.

In 1999, Horan became Australia’s third most capped player and most capped Australian centre, playing a vital role in Australia winning the tournament, its second World Cup victory. Horan was masterful throughout and in several games seemed to be dictating the pace and pattern of play all by himself. He won every award going around, and was announced Player of the Tournament, winning a year’s worth of Guinness.

Horan surprised many the following season when he announced his retirement from international rugby to play out his career with the famous Saracens club in England. His final game for Australia was on June 17, 2000, against Argentina in Brisbane, where Australia won 53-6. Some considered it too soon; but he knew what he was doing, he wanted to go out a winner. And he did. Horan retired with 80 Test caps, 114 state caps, 130 points and 40 tries.

Horan retains an avid interest in the game which was his life for so long, and relishes his role as a Wallaby selector. Tim is also a much respected member of the Channel Seven’s rugby commentary team, following on from his significant role in the 2003 Rugby World Cup coverage.