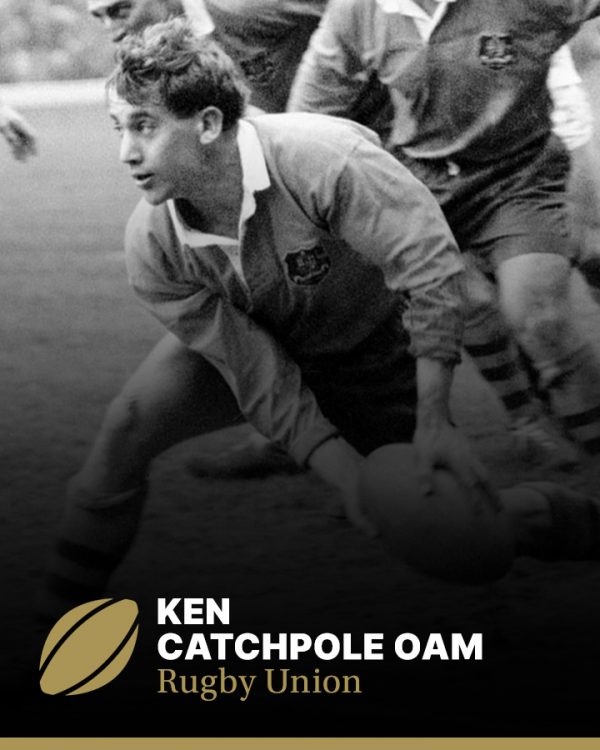 Ken Catchpole is widely acclaimed as one of rugby union’s greatest ever scrumhalves. He rose through the ranks of club rugby, playing for Randwick’s Under 21s before moving to the senior team. In 1959, at the age of 19, he played the first of 26 matches for New South Wales against the visiting British Lions. Catchpole, whose greatest strength was lightning, accurate passing and positioning outside players, helped NSW defeat the tourists in a major upset.

Two years later he established himself as Australia’s starting scrumhalf. In 1961 he became one of only nine players to make their Test debut as captain when, at the age of 21, he led the Wallabies in the three-Test series against Fiji. That same year he captained the team to South Africa and toured there again in 1963.

His partnership with Phil Hawthorne at flyhalf became legendary, as the pair laid the foundation for many historic victories including a two-Test series win against South Africa in 1965 and wins against Wales and England on the 1966/67 UK tour, with Ken as captain. After the win against England, the president of the English Rugby Union described him as, “the greatest halfback the world has known”.

Ken played 27 Tests for Australia, 13 as captain. His career ended prematurely when a severe injury suffered during the second Test against New Zealand in 1968, forced him from the field and into retirement.