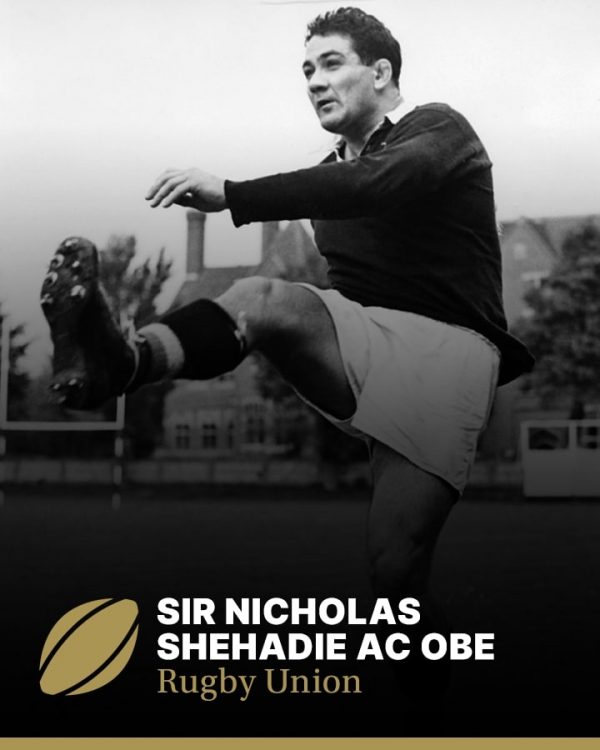 Sir Nicholas Shehadie AC OBE was inducted into the Sport Australia Hall of Fame in 1985 as an Athlete Member for his contribution to the sport of rugby union.

Sir Nicholas was one of the all-time great prop forwards and was an institution in the Australian rugby union team for a decade. He represented his country in more than 100 games and played 30 Tests (a record at the time), three as captain, between 1947 and 1958. Shehadie has been involved with distinction in almost every facet of rugby union.

One of his greatest honours was being the first player invited to appear against his own teammates for the Barbarians, during the Wallaby tour of Britain in 1957/58. After a magnificent match which the Barbarians won 11-6, spectators chaired Shehadie and Australian captain Bob Davidson from the field.

He also captained New South Wales and Randwick, where he played 175 first-grade games.

After his playing career, Shehadie went on to become a first grade referee, then a respected and authoritative administrator, becoming Executive Chairman of the NSW Rugby Union in 1979 and then President of the Australian Rugby Football Union in 1980. He managed the 1981/82 Wallabies on their British Isles tour and Australian teams to the Hong Kong sevens. Off the field, he was the thirty-third Lord Mayor of Sydney, elected in 1973.

His greatest legacy may well be the Rugby World Cup, now the third biggest sporting event in the world, for which he was a driving force.