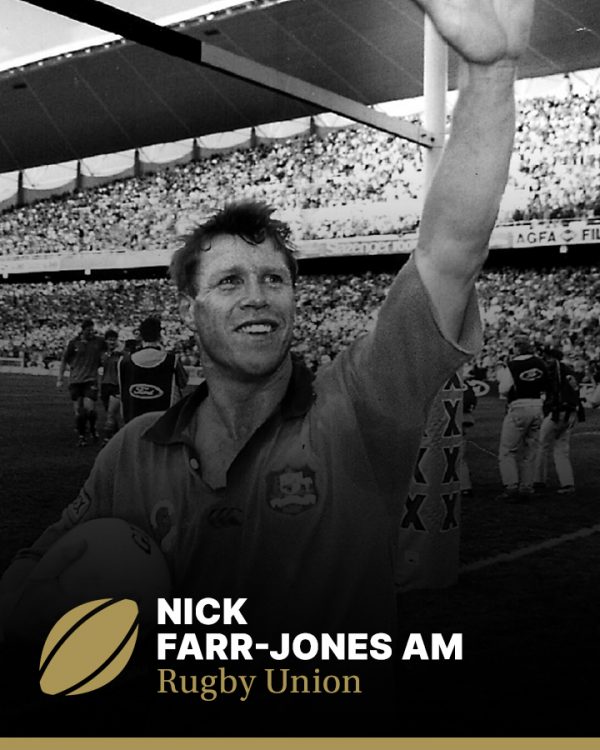 Nick Farr-Jones AM was inducted into the Sport Australia hall of Fame in 1992 as an Athlete Member for his contribution to the sport of rugby union.

From Caringbah, just south of Sydney, Farr-Jones has proved to be one of Australia’s greatest ambassadors for rugby union of all time, continuing his involvement in the game post-retirement through both writing and commentating.

While still studying law at Sydney University, he was first selected for New South Wales and Australia in 1984. As a scrum-half, and equipped with an accurate, bullet-like pass and outstanding tackling skills, Farr-Jones made his Test debut in November 1984, when he was selected to play against England at Twickenham in London. This was the first of 63 Tests he played between 1984 and 1993. On the 1984 tour, the Wallabies won all four Tests against England, Wales, Ireland and Scotland, thereby becoming the first Australian team to win the challenging ‘Grand Slam’.

It was the beginning of great achievements for Farr-Jones. He played in the inaugural Rugby World Cup in 1987, and a year later was named Australian captain.

When the All Blacks took a 2-0 lead in the 1990 Bledisloe Cup, Australia were handed the tag of the ‘Second Woeful Wallabies’, and both Farr-Jones and coach Bob Dwyer looked certain for the axe. However, Australia confounded the critics by taking the third test 21-9 after Farr-Jones had instructed his men to face out the All Blacks at the Haka. To celebrate, Farr-Jones and young centre Tim Horan swam naked in the icy waters of Wellington Harbour!

That win gave Australia enormous confidence and this carried over to the 1991 season when they defeated the All Blacks again in Sydney by 21-12. The return match in Auckland was lost 6-3, though some would believe that the memories of that loss served to motivate the team during the World Cup.

Sure enough, Australia made it through to the final of the tournament despite Farr-Jones carrying an ongoing injury which lead to him being taken off in the dying minutes against Ireland in a match that the Aussies won at the death thanks to a Michael Lynagh try. The final was a hard fought 12-6 win over hosts England at Twickenham, and as an added highlight, Farr-Jones played his 50th Test during the campaign.

The 1992 season was also highly successful with Farr-Jones captaining his side to victory in the Bledisloe Cup and then against South Africa in a one off test in Cape Town. He retired from the international game but was persuaded back for one last series against South Africa the following year. Though no longer captain, Farr-Jones drew on all his experience to guide the Wallabies to a 2-1 triumph before hanging up his boots for a second and final time. In total, Farr-Jones played 63 times for Australia, including 36 as captain, and scored nine tries. During his career, he formed a world record half-back combination with Lynagh of 47 Tests together.

1992: Made a Member of the Order of Australia (AM) for his service to rugby union