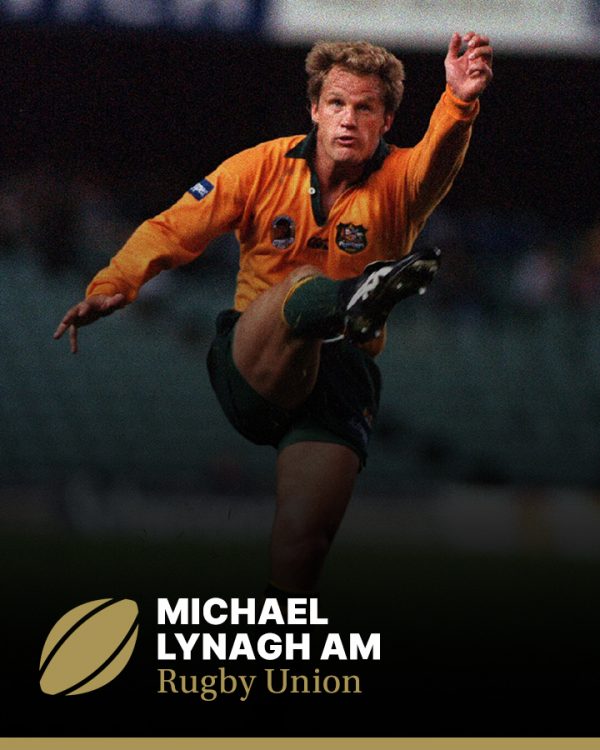 Michael Lynagh AM was inducted into the Sport Australia Hall of Fame in 1999 as an Athlete Member for his contribution to the sport of rugby union.

With Australia reeling from the early retirement of Mark Ella after their Grand Slam tour of 1984, the Wallaby selectors turned to Michael Lynagh who had played inside centre on that same tour.

After leaving school he played first grade for University and represented Queensland from 1982 to 1995. The young Queenslander, nicknamed ‘Noddy’, made his debut for Australia against Fiji on June 9, 1984 in Suva at the age of 20. Early in his career he played at inside centre as Mark Ella was the current fly-half. When Ella retired after the 1984 Grand Slam, Lynagh took over the position.

During the 1987 World Cup, he became the record points scorer of all time when he beat the record of Scotland’s Andy Irvine. He would go onto score 911 points -a benchmark that would remain until the 1999 World Cup when Wales’ Neil Jenkins surpassed it.

Lynagh was the complete fly half. He went on to win 72 caps for Australia, including playing a key role in Australia’s victorious 1991 World Cup campaign, and captained the Wallabies on 15 occasions. He was the regular Wallaby vice-captain from 1990 to 1993 and was Australia’s sevens captain from 1988 to 1993.

He was named captain of the Wallabies for the tour of Ireland and Wales in 1993 but damaged his right shoulder in the Test against Ireland. He retired from international rugby after Australia’s loss to England in the quarter-final of the 1995 Rugby World Cup. In 103 appearances for Australia, he scored 1157 points (19 tries, 211 goals, 222 penalty goals, and 10 field goals).

Lynagh joined Saracens of England at the advent of professionalism in 1996. Lynagh’s arrival at the club was the first major signing and he acted as a beacon to attract other players and fans alike. In the 1997/98 season Saracens battled it out with Newcastle Falcons for almost the whole season for top spot in the league and when the two sides met in front of a crowd of nearly 20,000 Lynagh slotted a match winning drop goal in the dying minutes to send Vicarage Road into raptures. A month later he was on hand to steer Saracens to their famous Tetley’s Bitter Cup 48-18 victory over Wasps at Twickenham, bringing the curtain down on a season to remember. He finally retired from the game in 1998.

In April 2002 Lynagh joined the International Rugby Board (IRB) to assist with the global development and promotion of the sport but resigned in September that same year.

In 1996 Lynagh was made a Member of the Order of Australia for his services to rugby union.