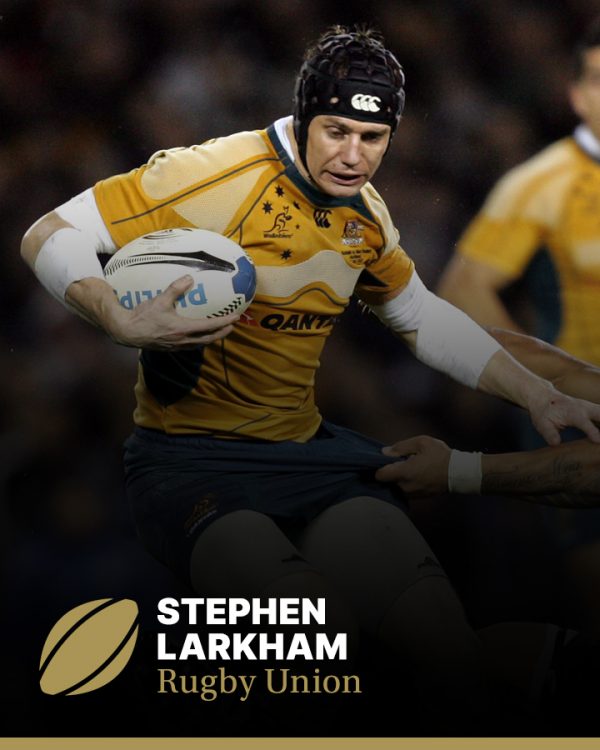 Stephen Larkham is widely considered the best fly half ever to wear a Wallaby jersey.

He began his club and international career, however, as a fullback. Recruited from reserve grade rugby in the ACT he was a member of the 1996 inaugural ACT Brumbies Super 12 squad — along with George Gregan with whom he was later to form a formidable scrum half/fly half combination in 79 international appearances.
(A stand at Canberra’s Bruce Stadium is named the Gregan-Larkham Stand” in honor of their long-standing partnership).

Larkham received his national call-up later that same year against Wales, as a reserve, coming on to replace Ben Tune on a wing. It was to be but the first of 102 games he would play for Australia.

He joined the Wallabies on their European tour later that year and played full back (replacing the injured Matt Burke) in the final test against Scotland, scoring two tries and helping the Wallabies maintain an unbeaten record for the tour.

Between his frequent international appearances he played 127 games for the Brumbies between 1996 and 2007 and scored 204 points.

Although he was a more than competent fullback, the great transformation of his career came in the 1999 World Cup when coach Rod Macqueen shifted him to fly half. It was a position he was to make his own for the remainder of his career.

He was selected in that role when Rugby Union named their Team of the Decade to celebrate 10 years of Super12/Super14 Rugby.

Larkham took part in three World Cup campaigns, with the Wallabies victorious in 1999, runners up in the thrilling 2003 series and quarter finalists in 2007. There was a memorable moment in the 1999 series when Larkham, not previously celebrated for his kicking and nursing an injured knee and clouded vision (later corrected with surgery) nailed a 48 metre drop goal to snatch a semi-final victory over South Africa.

Long troubled by injury, he effectively ended his international career in 2007 after injuring his knee in a World Cup match against Japan. His 102 appearances left him equal with long time Raiders teammate George Gregan with the record for most international appearances for Australia.

He played on in 2008 with Japanese club Ricoh Black Rams but Australians will always remember him in Brumbies or Wallaby colours.