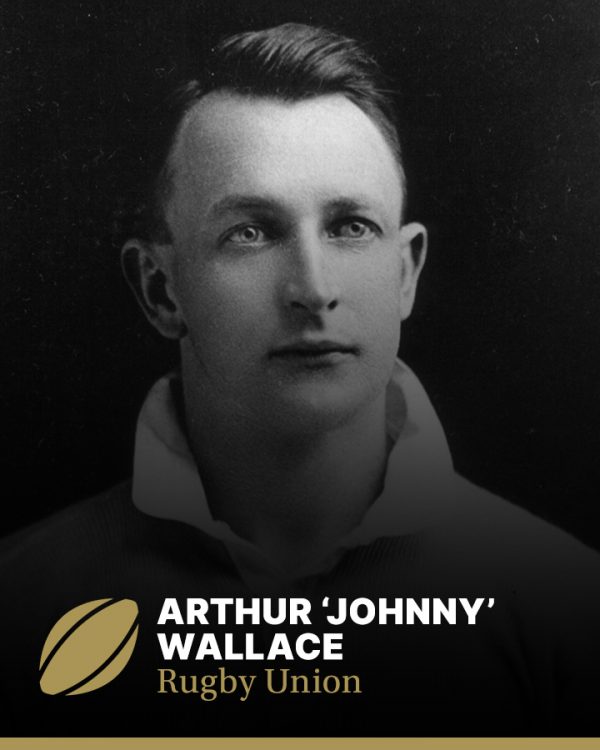 A tall loose limbed centre of masterly skill whose Tests were all played for Scotland until the Australian Rugby Football Union recognised three internationals played in 1921 and 1926 as Tests, and the five he played for the Waratahs. He was an incomparable tactician who had a marked influence on running rugby in Scotland and Australia, and had notable success as a coach after he retired.

Wallace attended Sydney Grammar School during World War I, where he excelled in athletics, rowing, and shooting and captained the best schoolboy rugby teams Australia has seen. In 1919, he played for ‘All Schools’ against Duntroon Military College and in 1921 he toured New Zealand with the New South Wales team on the first post war rugby tour by an Australian side. He was one of the stars of the game in Christchurch, which NSW won 17-0 against New Zealand.

Due to World War I and enlistment numbers, rugby union closed down completely in Queensland and was reduced to just minor club games in NSW. All Waratahs matches played against other international teams in the 1920s have been retrospectively granted Test match status, as they were the only national representative team.

Wallace went to Oxford as a Rhodes scholar after he completed a law degree at the University of Sydney, and won a Blue for rugby in 1922, 1923, 1924, and 1925. He played in the famous Oxford back line with Scottish international representatives. Wallace first played for Scotland in 1923, against France, and played against England, Wales, and France in 1924. He ended his time for Scotland in 1926 against France.

Wallace joined Glebe-Balmain and played for NSW against New Zealand in 1926 in two more Tests. In 1927/28 he returned to Britain and France as captain of the Waratahs when they lost only five of their 38 games during the tour. Ironically, the first international the Waratahs lost was against Scotland 10-8. It was the Waratah side which set the pattern for what became known as the ‘Australian style’ rugby, based on the simple tactic of attacking from any position on the field, always seeking overlaps, running hard into open space with sustained passing and backing up.

Wallace dictated the tactics of disciplined dispatch of the ball from scrums, lineouts and rucks that the Waratahs perfected to score 620 points with only 247 points scored against them. Apart from Wallace, who scored 11 tries, Cyril Towers, Tommy Lawton, Alec Ross, and Jack Ford, the Waratahs were far from champion individuals, and they suffered several bad injuries. They scored their high points total with understanding, teamwork, and by sticking to controlled passing rushes, as Wallace instructed the team to do.

Wallace retired from the playing field after the 1927/28 tour and was immediately installed as a state selector, but in 1937, when the Springboks toured Australia, he coached the NSW and Australian teams, and NSW achieved one of its greatest victories when it beat the Springboks 17-6 on a water logged Sydney Cricket Ground. Predictably, in a team coached by an ex Waratah, the wingers dominated the NSW score, with ‘Jockey’ Kelaher and ‘Fob’ O’Brien each scoring twice, and Cyril Towers once. The Springboks could not believe the running game could lead to tries on such a foul day, when the field was a mud heap. Wallace said the Tests produced the highest standard of rugby he had seen in international football. South Africa won the first Test 9-5 after fierce forward clashes. In the second Test the Australian staged a thrilling second half recovery after being behind 26-6 at half time, where they threw everything into sustained passing bursts, scoring 11 points to nil, before time ran out. Australia lost 17-26, but Wallace had proved his point.

The running game was what spectators wanted to see -hardly a spectator left the ground when the game ended, and the crowd burst into sustained applause for both sides. Wallace also coached the Wallabies that year, and his last major coaching effort was with the 1953 Wallabies, whose tour to South Africa was captained by John Solomon.