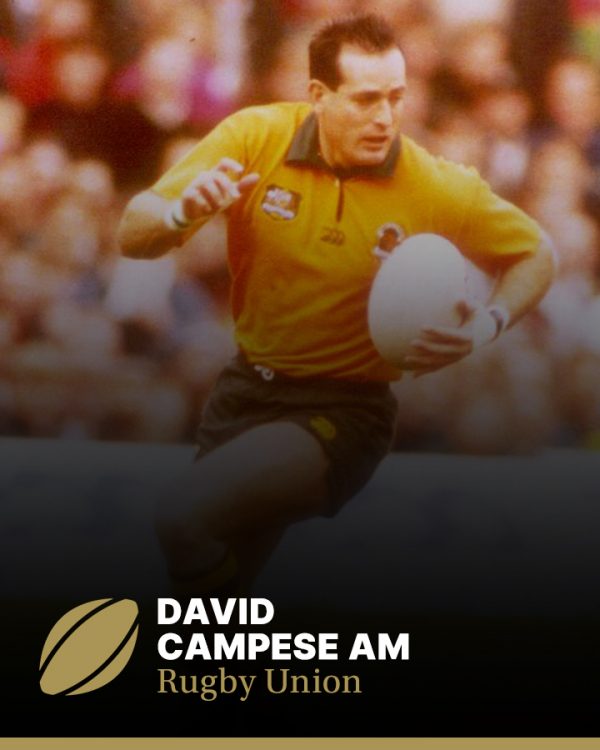 David Campese AM was inducted into the Sport Australia Hall of Fame in 1997 as an Athlete Member for his contribution to the sport of rugby union.

Campese remains widely regarded as one of the greatest ever rugby players. In an international career spanning 15 years, he played more Test matches for Australia and scored more tries than any other player in the history of the game.

David began his rugby union career with the Queanbeyan Mighty Whites in the ACT rugby competition in 1979 in fourth grade. He was promoted to first grade the following year. In 1982 he was selected for the Australian Under 21 side against New Zealand at the age of 19.

His outstanding ability as a rugby player resulted in his selection for the ACT, Australian U21, New South Wales, Australian Wallabies, Barbarians, and Australian Sevens teams.

David Campese, first capped for Australia against New Zealand in Christchurch on August 14, 1982, collected a total of 101 caps, both as a wing-three quarter and at fullback, which placed him second on the list of the world’s most capped players behind Serge Blanco, and he still holds the world record of 64 international tries breaking the record at the 1987 World Cup semi-final against France.

David scored the first of his international tries on debut against the All Blacks and in his fourth international outing, against the United States at Sydney in 1983, he scored four tries to match the Australian international record – and for good measure, he also kicked a conversion.

He was on the winning Australian Grand Slam side that toured Great Britain in 1984, and came up with the try of the tour with his second against Scotland at Murrayfield. It was the first Australian side to defeat all four home sides of England, Ireland, Wales, and Scotland on a tour.

David played for Italian club Petrarca in the northern city of Padua from 1984 to 1988 during the northern winter. He transferred to the Amatori club in Milan in 1988 and played there until 1993.

In 1986 he was a member of the side that beat the All Blacks 2-1 in New Zealand, only the second Australian team to win a Test series in New Zealand. In 1987 he joined the Sydney club Randwick from the Queanbeyan Whites.

David scored his 50th Test try against South Africa in Cape Town in 1992, in the first Test match between Australia and South Africa since 1971.

On October 23, 1996, David became the first Australian rugby player to play 100 Tests, when selected to play in match against Italy in Padova.

David finished his Test career on the Italy, Scotland, Ireland, and Wales Tour with his 101st Test against Wales at Cardiff Arms Park, on December 1 1996. A crowd of 70,000 farewelled him with a standing ovation.

Orthodox or unorthodox David Campese has always been memorable entertainment. Fast and elusive, and of course with that unique ‘goose-step’, he has over the years provided us with his own brand of magic on the field.

1989: Named in the Team of the Decade by Rothmans Rugby Union Yearbook
1991: Voted Australian Society of Rugby Writers’ Player of the Year
1992, 1993: Named as one of the five Rothmans Players of the Year
1996: Awarded a UNESCO prize as one of the outstanding sportsmen of the century in 1996
2001: Inducted into the International Rugby Hall of Fame
2002: Made a Member of the Order of Australia (AM) for services to rugby union