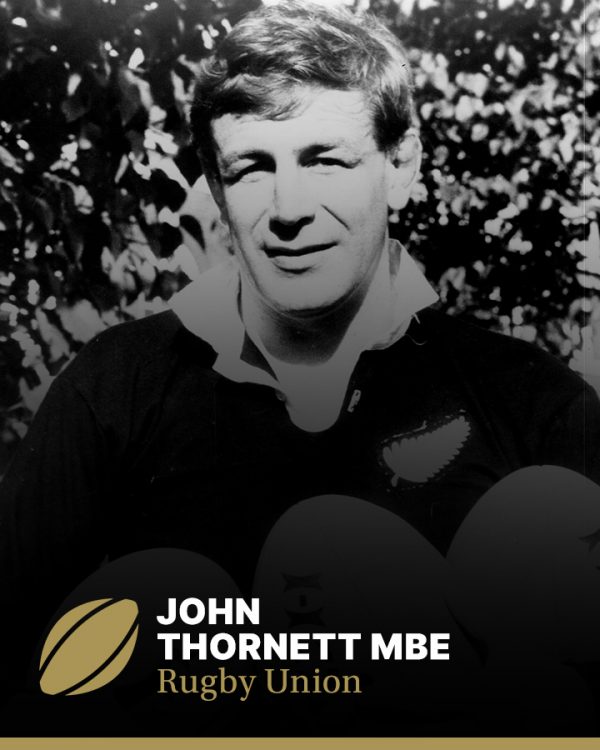 John Thornett was adamant in his upholding of sportsmanship in the game of rugby union. Words of negativity, criticism and bitterness were not uttered when the looming figure of John Thornett was around. He believed that rugby union was a means of building character and supported the fundamental ideals of the game wherever he could.

Educated at Sydney Boys High School, John played for Sydney University and Northern Suburbs. In 1955 he made his debut for both New South Wales and Australia, playing a total of 21 representative games for NSW and 37 Tests for Australia between 1955 and 1967, going on eight tours for his country, four of them as captain.

John had three positional changes in his Test career – first as flanker, then to the second row, where he was joined by his brother Dick, and finally to the front row where he won plaudits as one of the world’s best prop forwards.

In 1964 he captained Danny Craven’s team of internationals at the South African Rugby Union’s 75th Anniversary and in the same year was one of the New Zealand Rugby Almanac’s five international “Players of the Year”. He was the second Australian player, after Nicholas Shehadie, to play 100 games for his country.

He captained Australia from 1962 to his retirement in 1967. An inspirational leader, John advocated hard but fair play, and his teams recorded famous wins over South Africa, England and New Zealand in the mid-60s.

John Thornett was also a NSW water polo representative from 1955 to 1958.