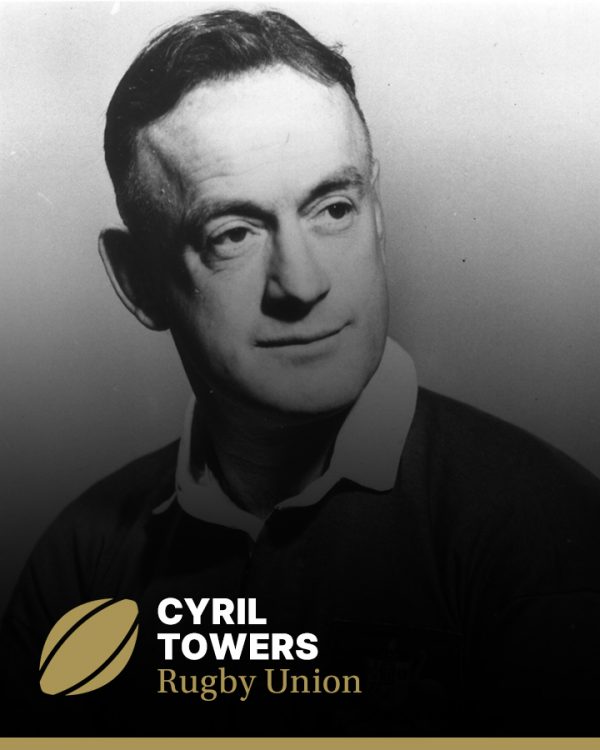 Cyril Towers was inducted into the Sport Australia Hall of Fame in 1987 as an Athlete Member for his contribution to the sport of rugby union.

Towers was a champion centre who played 48 matches for New South Wales, 25 for the Waratahs, and 233 in first grade for Randwick, but only had the chance to play in 19 Tests (twice as captain), ten of which have only been recognised as internationals since his death.

He was one of the most accomplished exponents of back line play Australia has produced. He was fast, tough, but always a lesson in sportsman like behaviour. An advocate of the running game, it was through his influence and that of Wally Meagher and Len Palfreyman that Randwick became Australia’s leading club team.

Towers joined Randwick in 1925 and almost immediately became involved in the club’s running game. He had three matches sanctioned as Tests in 1926 against New Zealand in Sydney, three in New Zealand in 1928, and one against the Maoris in 1928, plus three on the Waratah’s UK tour in 1927/28 partnering Syd King and occasionally Johnny Wallace in the centre.

Due to World War I and enlistment numbers, rugby union closed down completely in Queensland and was reduced to minor club games in NSW. All Waratahs matches played against other international teams in the 1920s have been retrospectively granted Test match status, as they were the only national representative team.

Towers went onto a wonderful rugby career, playing for Australia for a decade. He played in two of the three Tests against New Zealand in 1929, missing the other through injury, and in the British Lions Test in 1930. Strongly voiced differences of opinion with the Australian manager Dr Wally Matthews, led to Tower’s omission from the touring party to South Africa in 1933. He was back in the Australian side in 1934 assisting Australia to a win and a draw against the All Blacks, and thereby winning the Bledisloe Cup for the first time.

In 1937 he played in the historic Waratahs victory over the visiting Springboks then captained Australia in the two Test series.

Towers retired from rugby at the age of 34 and later became an outstanding rugby commentator for the ABC. Few ardent rugby followers felt their weekend was complete without listening to his match summaries. Even veteran players felt they learned from them.