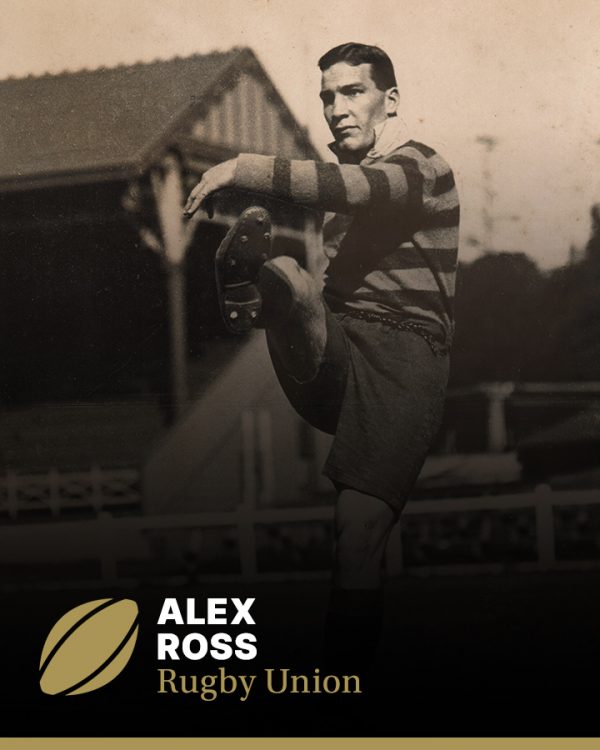 Alec Ross was one of rugby union’s greatest fullbacks. He was gifted with great anticipation and a guileful grasp of positional play, a marvellous exponent of the punt kick, and a safe tackler and catcher of the ball in all conditions. He played in 20 international Tests, three as captain. Apart from his representative matches, he played in 106 first grade matches, 66 for university, 22 for Easts, and 18 for Manly.

Ross learned to play rugby at Sydney Grammar School. He first played for Sydney University while he studied medicine and made the first of his 33 appearances for New South Wales in 1925 against an extremely powerful New Zealand side that won all three matches at the Sydney showground. Ross captained the Eastern Suburbs to a championship in his first year with the club after graduating from University.

He was just starting to develop as a goal kicker when he landed his first points in representative football with a penalty in his third match. He went on to score 119 points for NSW from 37 goals and 15 penalty goals. His best scoring performance was in 1926 when he contributed a goal and three penalty goals for NSW, beating New Zealand 26-20 in Sydney.

Due to World War I and enlistment numbers, rugby union closed down completely in Queensland and was reduced to just minor club games in NSW. All Waratahs matches played against other international teams in the 1920s have been retrospectively granted Test match status, as they were the only national representative team.

Alec Ross is credited with caps against New Zealand in 1925 and 1926 and was one of the main reasons for the Waratahs remarkable success on tour in Great Britain (including beating Wales 18-8), France, and North America in 1927/28. As the only full back selected for the tour he played in 29 of the 34 matches, more than any other player, including all the internationals. His reliability as a back was an integral part of the teams tactics and earned him the title of “Ross of Gibraltar”.

From 1929 when Australia again played as a nation Ross played in nine internationals for five victories, one draw, and three losses, scoring 26 points from seven goals and four penalties.

He went on to become one of the truly great full backs, missing only an occasional Test match through unavailability until 1934. Having played against the All Blacks in 1929, the British Lions in 1930, the All Blacks again in 1931 and 1932, as well as the New Zealand Maoris in 1931, he captained Australia on their first ever tour to South Africa in 1933 where an appendicitis operation ruled him out of the first four Tests. He returned for the fifth Test and led Australia to a 15-4 victory. The talented modest full back retired after captaining Australia to win the Bledisloe Cup in 1934.

Ross was often compared to the great New Zealand Maori George Nepia. Dr Ross served as a coach, selector for NSW and Australia, and administrator to the Australian Rugby Football Union and was made a life member of the New South Wales Rugby Union.