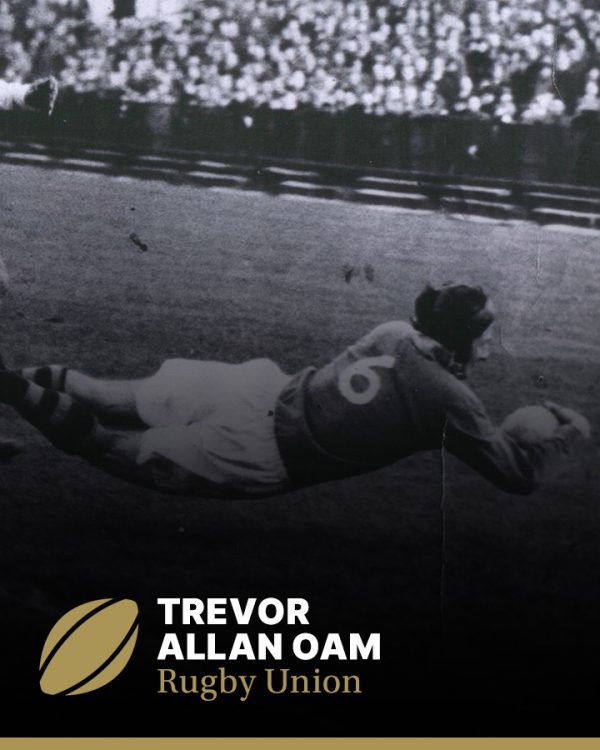 Trevor ‘Tubby’ Allan OAM was inducted into the Sport Australia Hall of Fame in 1986 as an Athlete Member for his contribution to the sport of rugby union.

Allan personified the gentlemanly nature of the then amateur game while establishing himself as one of the most devastating tacklers of international rugby. Allan became captain of Australia days after his 21st birthday when he led the Wallabies in their sixth match of the 1947/48 tour of Great Britain after Bill McLean sustained a broken ankle, the second youngest Test captain to P.J. Jimmy Flynn, who led Australia in 1914 at the age of 20 years and seven months. McLean called Allan to his side as he was stretchered from the field with a broken ankle and told him: “It’s all yours, Tubby!”

It was a shock when he signed in 1950 for a reputed £5000 to play rugby league for Leigh (UK). He arrived in the Lancashire town with his wife, Judith, in the middle of a snowstorm – something neither of them had seen before.

Rugby league was in the middle of one of its international transfer bans, but that restriction did not apply to union players and the interest in Allan was so intense that 5000 supporters paid to see him make his debut in the reserve side on a Saturday morning. He made his firsts debut in January 1951, scoring 12 tries in 19 games in his first part-season, and was an automatic selection for the rest of his stay.

That stay was relatively brief – his final games for the club were at the start of the 1953/54 season – but he caught the imagination of his new home-town in a remarkable way.

Part of it was due to his appearance. He was the first back who anyone could remember playing in a scrum-cap and that made his ferocious tackling all the more obvious and eye-catching, especially from a relatively lightweight player. When he lost his head-gear during his stint with Leigh, he had to have a new model made by a local cobbler; it was as much his trademark as his superb defence.

He was also a regular try-scorer, with 52 in his 97 games for Leigh, the most important of them a long-range effort in the Lancashire Cup final victory over St Helens in 1952.

He was such an iconic figure in the town that more than one baby born around that time was given the forenames Trevor Allan in tribute to him. The compliment was reciprocated when the Allan’s called their daughter Leigh.

Allan scored 30 tries for the club in the 1952/53 season but at the start of the following season, he suffered a serious ankle injury and made the decision to go home to Australia.

During his time in England, Allan represented the International XIII ‘Other Nationalities’ against England, Wales and France, played in the British Empire team against New Zealand, and in 1951, played for Australia against Great Britain. While with Leigh, he played against the touring Kangaroos in 1952.

On his return to Australia, Allan was persuaded out of retirement to join the North Sydney Club, the club he also coached in 1957 and 1958. He played a total of 15 matches for Norths, but recurring leg injuries hampered the latter part of his career. Upon retirement, he became a highly-respected radio commentator for the ABC from 1959. Allan has been described as one of the finest centres ever to represent Australia at rugby union and one of the best players never to have represented Australia at rugby league.

1991: Received the Medal of the Order of Australia (OAM) in recognition of his services to rugby union