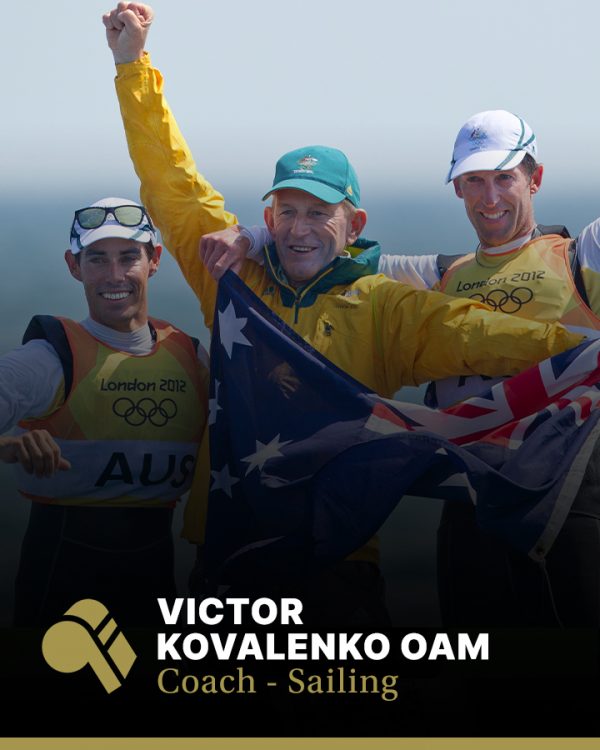 Victor Kovalenko OAM was inducted into the Sport Australia Hall of Fame in 2013 for his contribution as a coach to the sport of sailing.

Victor Kovalenko was a national 470 Class champion in his native Ukraine, but his greatest impact on the yachting world came when he moved to Australia in 1991. Since then his coaching skills have guided Australians to 40 international medals, seven of them Olympic gold. Head coach of Australia’s yachting team for more than a decade, Victor saw the fullest fruits of his work in London 2012 when our yachtsmen and women claimed three gold and one silver. His Rio Olympic campaign would yield the Australian 470 crew a silver medal, the same crew were able to change this medal five years later to gold at the Tokyo 2020 Olympics.

Born in Ukraine, Victor grew up in Dnipropetrovsk, where he earned a special diploma with gold medal from the faculty of physical culture at the Nikolaev Pedagogical Institute. He was a competitive sailor from an early age and won national championships in both the 470 class and the Flying Dutchman.

He was denied a chance to sail in the Olympics by the boycott of the 1984 Los Angeles Games, but that accident of fate fired a hunger for Olympic success which he has fulfilled many times over as a coach.

He coached Ukraine to silver at the 1996 Atlanta Olympics and the following year was invited by the Australian Yachting Federation to coach the Australian 470 crews.

Under his guidance both the men’s and women’s teams took gold at the Sydney Olympics.

He was appointed national head coach and AIS sailing coach immediately after the games. Success did not come at Athens in 2004 but in Beijing in 2008 Nathan Wilmot and Malcolm Page took gold in the men’s 470 class and Elise Rechichi and Tessa Parkinson took gold in the women’s 470.

The result was even better in London in 2012 with three gold and a silver delivering Australia’s best ever yachting medal haul and elevating Australia to head the yachting medal tally for the first time in its history. Kovalenko had been working with Malcolm Page for 16 years in the lead up to the 470 class gold medal which he won with Matthew Belcher.

Following Page’s retirement Kovalenko continued to coach Matthew Belcher in the 470 Class and, at the 2016 Rio Olympic Games with new partner Will Ryan, guided the crew to a silver medal finish.

Five years later, after not being content to leave the crew with a silver, Kovalenko coached Belcher and Ryan at the delayed Tokyo 2020 Olympic Games. The pair sailed to an insurmountable lead and only needed to ensure they weren’t disqualified in the final to claim the gold medal.

Legend of Australian Sport and Skipper of America’s Cup winning boat Australia II, John Bertrand AO said of Kovalenko; “Victor Kovalenko is the most successful Olympic sailing coach of all time. He has coached teams now to eight gold, four silver and one bronze. When considering there’s only one gold available per class, this is a phenomena. Incredible record, incredible man!”

2012 – Awarded the Medal of the  Order of Australia for service to sport, particularly as the national head coach of the Australian Olympic Sailing team.

2017 – Inducted into the Australian Sailing Hall of Fame