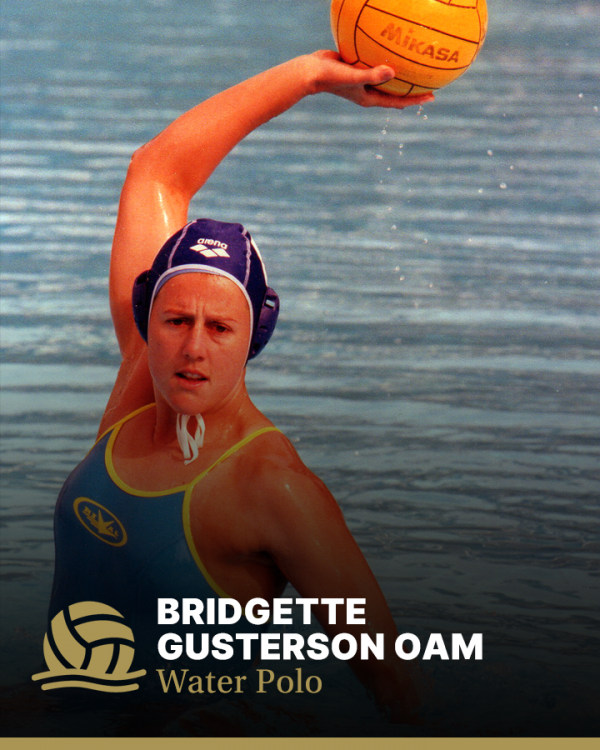 Bridgette Gusterson was inducted into the Sport Australia Hall of Fame in 2020 as an Athlete Member for her contribution to the sport of water polo.

Bridgette Gusterson had an outstanding water polo career which featured the undoubted highlight of captaining Australia to the first ever Women’s Water Polo gold medal at the Sydney 2000 Olympic Games. In what was a memorable moment for Bridgette, she scored the winning goal from a clever flick over the Russian goalkeeper’s shoulder to proceed to the gold medal match. Bridgette debuted for Australia in 1992, subsequently amassing 212 international matches and scoring more than 400 goals. She played in four World Cups and two world championships campaigns before the Sydney Games.

The highlight of her outstanding career was captaining Australia to the gold medal the first-time water polo was played at Olympic level, in the Sydney 2000 Olympic Games.

According to the International Swimming Hall of Fame, “Bridgette set the standard for female water polo players around the world.” As she grew to just short of six foot, her physical attributes were matched by a fierce determination to master all technical aspects of the game as she became a feared all-rounder, accurate passer and inside shooter.

Growing up in Perth, Gusterson always wanted to be an Olympian but didn’t have a sport, realising that she was destined to grow too big for her first choice, gymnastics. Her family lived two minutes from the Melville Water Polo Club and after trying out one day with her sister, the choice became clear – even though it wasn’t an Olympic sport at the time.

Gusterson then joined the Somerset club in Perth, contributing to six A grade premierships and one Australian club championship in 1994. She made the West Australian team in 1990 and participated in 10 national championships for two titles in 1995 and 1998, the latter as captain after contesting eight consecutive national grand finals.

She made her first appearance in the national team in 1992 and subsequently amassed 212 international matches, scoring more than 400 goals. In 1995 she scored a hat-trick in leading Australia to the World Cup gold medal over the Netherlands, one of four World Cups and two world championships in which she participated. Gusterson became the first Australian woman to receive a professional contract to play in Europe, representing the Italian club Orrizonte from 1995 to 1997.

Gusterson took over the captaincy of the Australian team in 1998, not long before the Sydney Olympic Organising Committee announced that women’s water polo would be played for the first time and remained in charge for 59 matches.

In the Sydney 2000 Olympics semi-final game against Russia, Bridgette scored the winning goal with a clever flick over the goalkeeper’s shoulder. In the dramatic final against the United States, she made the assist that led to the winning goal to break a tie and clinch the gold medal with just 1.3 seconds remaining. She was the team’s top-scorer for the tournament and shared the triumph with her sister and team-mate Danielle.

Gusterson retired after the Sydney Olympics and continued to be involved as a coach.

Bridgette was awarded the Medal of the Order of Australia in 2001 for services to sport as a gold medallist at the Sydney 2000 Olympic Games. She was inducted into the Water Polo Australia Hall of Fame in 2010 and the International Swimming Hall of Fame as a Water Polo Player in 2017.