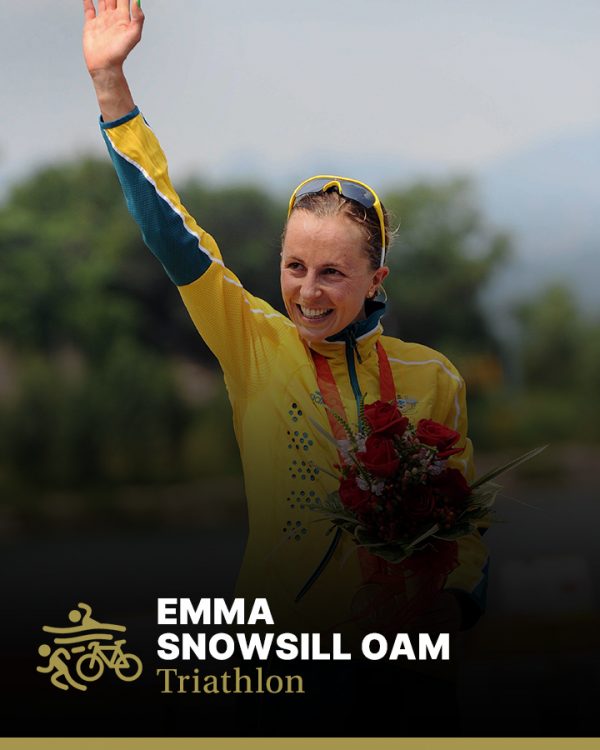 Emma Snowsill OAM was inducted into the Sport Australia Hall of Fame in 2019 as an Athlete Member for her contribution to the sport of triathlon.

Upon her retirement in 2014, Snowsill held the honour of being the highest award-winning woman in the triathlon’s history, having won Olympic and Commonwealth Games gold medals, three world championships, as well as 12 International Triathlon Union (ITU) World Cups and 23 podium finishes.

Always a sporting all-rounder, she dabbled in swimming, tennis, basketball, ballet and skiing through childhood before becoming hooked on triathlon at age 16. Her rise to the top was meteoric, winning her first national age title in 2000 and following it up soon after with a win at the junior world championships in Perth and the Australian Youth Olympic Festival the following year.

Snowsill became a household name at the 2008 Beijing Olympic Games when she became the first and only Australian to date (2019) to win Olympic gold in the swim-ride-run discipline of Triathlon, a feat that represented a triumph over years of pain, tragedy and frustration.

Six years earlier, two years before the 2004 Athens Olympic Games, her life was turned upside down when her boyfriend and fellow triathlete Luke Harrop was killed in a hit-and-run accident while on a training ride. She contemplated quitting the sport but after a break and solace from Luke’s sister Loretta and a change of coach she decided to keep going.

In 2003, when she was World Champion, she suffered a stress fracture of the femur during the Olympic trials, putting her out of contention for the Athens Games.

In Beijing, the tiny (48kg) Snowsill took the lead during the final leg and -“running scared,” she said -was never headed. After embracing the placegetters and her family she wept, saying: “Everybody has a personal story and everybody deals with it differently. You can only look forward to tomorrow. You can’t change the past, only take control.”

Snowsill won her world championships in Queenstown, New Zealand, in 2003, Gamagori, Japan, in 2005, and Lausanne, Switzerland in 2006, making her the first female triathlete in the world to win three world titles, and she took silver in Hamburg, Germany, in 2007.