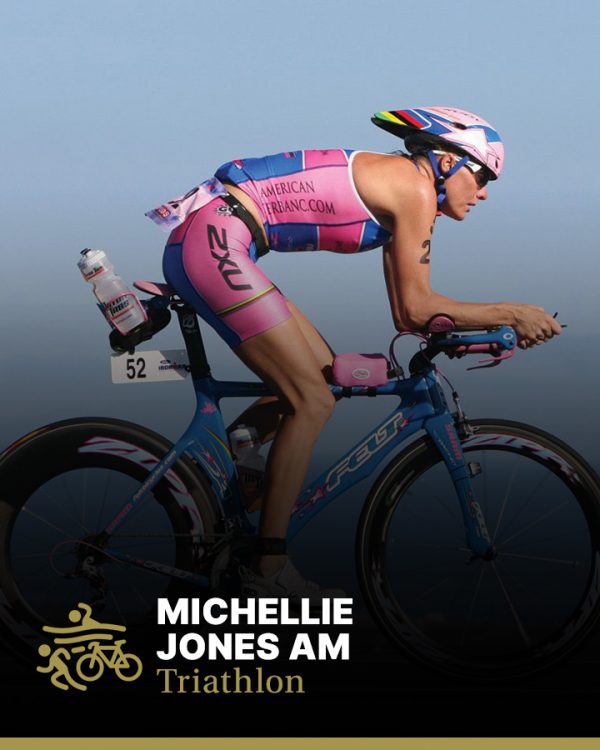 Michellie Jones AM was inducted in the Sport Australia Hall of Fame in 2014 as an Athlete Member for her contribution to the sport of triathlon.

In what has been a relatively short history of triathlon’s recognition as an international event, few of the remarkable number of champions that Australia has produced boast a record that can surpass Michellie Jones’. In a career spanning 20 years, she recorded 175 victories across varying distances and has stood on the World Championship podium on more occasions than any other triathlete.

Jones competed in her first triathlon in 1990 and by 1993 she was a dual ITU World Champion after winning back-to-back titles in 1992 and 1993. In 1996 she won the inaugural XTERRA Triathlon World Championship and further enhanced her reputation as the world’s best when she won back-to-back ITU Triathlon World Cups in 1998 and 1999 before winning silver in the opening event of the Sydney 2000 Olympic Games in a performance that many Australians will vividly remember.

Between 1991 – 2003, as well as being a dual World Champion, Jones finished runner up twice and was placed third on another four occasions. In the same period, she scored an impressive twelve World Cup victories, won the San Diego International ten times, the Chicago Triathlon seven times and won the gruelling Escape from Alcatraz event eight times – an event she remains the female course holder in.

In 2004, Jones moved into longer distance Ironman Racing and had immediate success as she claimed gold in her first attempt at the distance in Florida. She followed this up with silver in the 2005 Ironman World Championship, which was just the second time she had competed in an iron distance triathlon. Jones won the 2006 Ironman Arizona Triathlon the next year, as well as the iconic Kailua-Kona, Hawaii Ironman, which was significant for two reasons – it meant she became the second Australian ever, behind fellow SAHOF Member Greg Welch OAM, to win the event as well as the first Australian woman to win a World Ironman Championship.