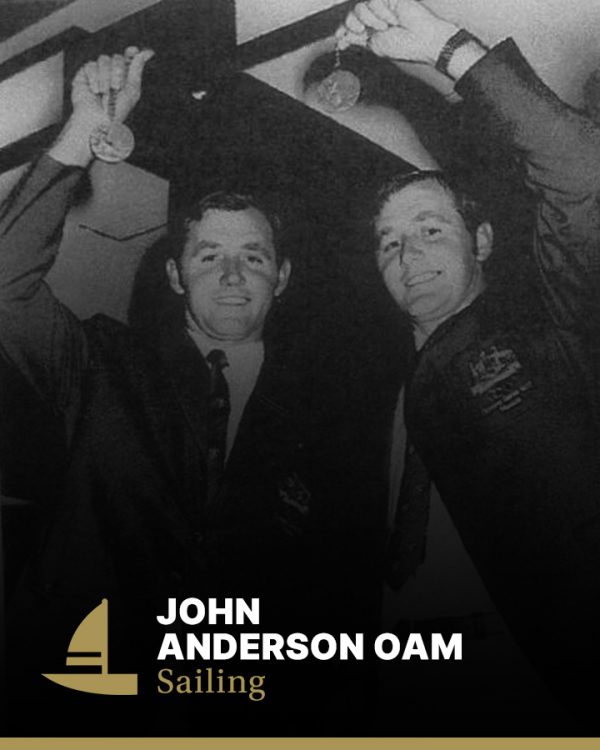 John and Tom Anderson imparted an extra dimension to the Australian Olympic team’s results at the 1972 Munich Olympics. They set a new Olympic record by becoming the first twins in history to win gold medals in separate events at the same Olympics. This record still stands today.

When they achieved their separate glory in Kiel, it was on the same day at roughly the same time. Because both sailed their final races over different courses, well apart, the question of which twin first won gold remains unsettled.

It was after the 1970 America’s Cup challenge that David Forbes and John Anderson (members of ‘Gretel II’) began planning for the 1972 Games. They won the 1971 Australian Star class championship in ‘Scallywag’, then sailed the boat in the Olympic trials, winning all seven races. Competing in Europe, they found their opposition much stronger.

In the Kiel Week regatta, they tended to do well in the early stages of the races, but would then start to fall back through the field. Overall they finished 28th in the regatta and they realised that they were just too slow. A month before the Games, they decided they needed to replace ‘Scallywag’ and it represented a huge gamble. Anderson went boat hunting and in Switzerland, found ‘Simba’.

As the Games loomed, they raced ‘Scallywag’ and ‘Simba’ in tuning trials, with Forbes steering ‘Simba’ and Anderson in charge of ‘Scallywag’. Other Australians, including Tom Anderson, made up the crew numbers.

Because of their poor form in ‘Scallywag’, and the makeshift nature of their switch to a new boat, Forbes and Anderson weren’t considered serious contenders to the Olympic title. With a bit of fine tuning they found speed on the eve of the Olympics and were suddenly confident. The strategy was simple, Forbes would steer, and Anderson would call tactics, and they would take no gambles.

It worked, in the seven races, they finished third, eighth, second, third, fourth, first, and third. Under the system, the worst performance was disregarded and thus their results were a model of consistency. By finishing third in the last race, they won emphatically with Sweden second and Germany third.

John also competed at the 1976 Montreal Olympics as a crewmember in the Soling class, finishing 11th.

As well as winning the 1971 Australian Star class championships on ‘Scallywag’, John sailed with his brother Tom in the Flying Dutchman class on ‘Kalinda’ in 1966, finishing third. In 1975 John sailed in the Soling class on ‘Pocahontas’ with David Forbes and Denis O’Neill finishing first.

He competed in the 1973 and 1977 World Championships, finishing second both times. In 1973 he sailed with David Forbes and Denis O’Neill in ‘Pocahontas’ in the Soling class, and in 1977 he sailed for Ireland (in Australia) under Harold Cudmore on ‘Silver Shamrock III’ in the Half Ton Cup.

In 1975, John was part of the winning Soling class crew in the North American Championship and that same year, won the pre Olympic Regatta at Kingston. He was a member of the Australian Admirals Cup Team in 1973 on ‘Apollo II’, 1975 on ‘Love and War’, and 1977 on ‘Runnaway’.

John was awarded the Medal of the Order of Australia (OAM) in 1986 for his services to sailing.