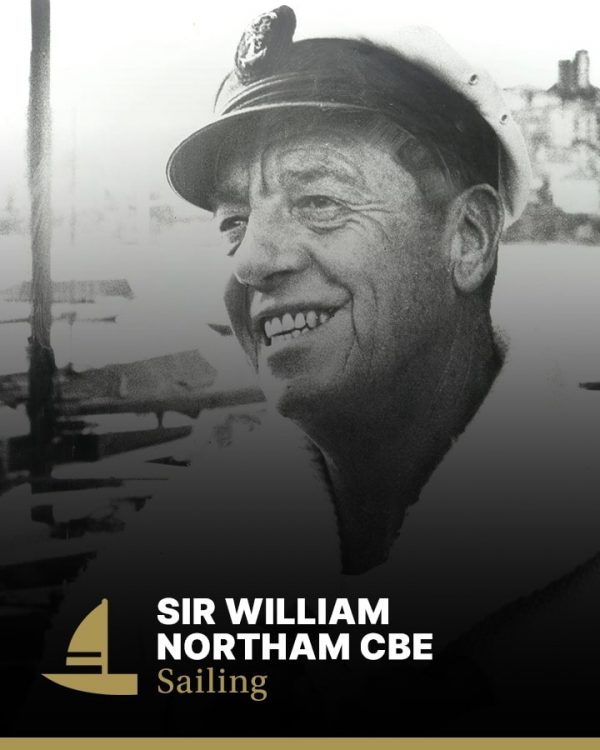 Bill Northam was always sports minded and after dabbling in athletics as a youngster, became a dedicated motor sportsman in his early twenties. Northam was among a group of brave pioneers who raced cars on the old dirt and gravel circuit at Phillip Island (Victoria) and for a time also raced motorcycles.

Australia’s final gold medal at the 1964 Tokyo Games, the first the nation had ever won in sailing, went to its 5.5 metre class crew, Bill Northam, Peter ‘Pod’ O’Donnell and James Sargeant. Northam, the skipper, was 59 and the grandfather of five, the oldest Australian ever to have won an Olympic medal. The Japanese fondly dubbed him Ogesan (old man). He may also have been the most garrulous. He heckled his opponents on jetties and across the water, argued good naturedly during races with O’Donnell and Sargeant, and unsettled the man he considered his main rival, the American skipper John McNamara.

Northam was one of the sport’s more refreshing characters, quite dedicated to winning but never prepared to take himself too seriously. He had had a successful career in business, as chairman of both Johnson & Johnson and Slazenger. He did not take up sailing until he was 46.

Northam’s introduction to sailing came after he bought a waterfront property at The Basin, Pittwater, Sydney, looking across at the Barrenjoey lighthouse (which inspired the name of the boat he took to the 1964 Games). Taken for an outing by a neighbour, he fared badly at handling the sails, but found he had a real aptitude at the helm. He sensed the capacity to feel the boat beneath him, almost anticipate its movement, and he attributed that to his experience of racing cars on dirt tracks. So enthused was he that he bought a boat, ‘Gymea’, and began to race her; undeterred by a disqualification in his first race for running into the starters boat, he had enough success to inspire him to tackle some larger challenges. After buying an 8 metre yacht ‘Saskia’ in England he showed his competitive nature and sailing skills by winning back for the Royal Sydney Yacht Squadron the prestigious Sayonara Cup in 1955 and 1956. He then had many successes in ‘Caprice of Huon’ (Sydney to Hobart) and the Sabre class ‘Jazzer’. He was a member of Frank Packer’s ‘Gretel’ syndicate for the 1962 America’s Cup.

In 1963 he decided to set himself a new challenge, the Olympics. He went to the United States, sought out naval architect Bill Luders, and had him build the 5.5 metre craft he called ‘Barrenjoey’. He asked O’Donnell and Sargeant, both more then 30 years younger than him to join him, and he entered the 1964 Australian titles and Olympic trials, against skippers like Jock Sturrock and Norman Booth.

Northam was an audacious sailor, happy to use unconventional tactics. Although ‘Barrenjoey’ and her crew won the championship and Olympic selection, then another set of challenge races, Northam had his detractors; some said he was too old, and many pointed out that Jock Sturrock had previously been to four Olympic Games.

Northam marched in the Tokyo opening ceremony with his son Rod, an emergency in the rowing team. No father and son had previously represented Australia at the same Olympics; this time two pairs did -the Northams and the Roycrofts, Bill and Barry.

With Northam as helmsman, Sargeant the for’ard hand and O’Donnell on the main sheet, ‘Barrenjoey’ made its mark quickly, with a win in the first raced. He distracted his rivals as they approached the line, claiming that they were too early, as they checked their watches and turned about, he gave himself clearance. McNamara, the danger man from the United States, finished 10th in the first race, and Northam couldn’t resist the temptation to heckle.

McNamara, in ‘Bingo’, went on to win the next two races. The Australian craft won the fourth and sixth, but was disqualified in the fifth. With the final race to go, Australia had 5407 points, the United States 5106. McNamara could take the gold only if he won, and ‘Barrenjoey’ finished worse then fourth.

In a desperate finish, fighting out first place with the Swedish boat ‘Rush VII’, McNamara was disqualified. The Australians finished fourth, qualifying as overall winners.

After the Tokyo Olympics, Australians honoured him with the award of Australian Yachtsman of the Year and a commemorative sculpture in Sydney Park.

He was made a Commander of the Order of the British Empire in 1966 and in 1976 he was knighted for his distinguished services to the community.