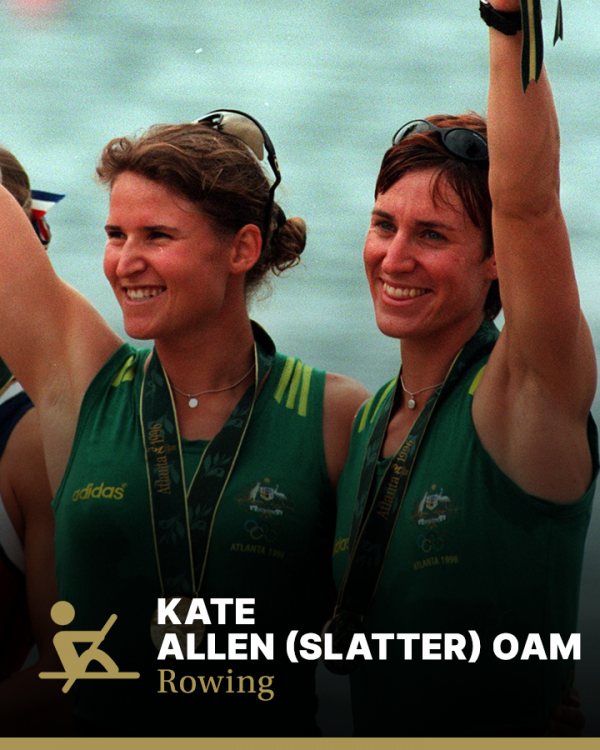 Kate Allen (Slatter) OAM was inducted into the Sport Australia Hall of Fame in 2002 as an Athlete Member for her contribution to the sport of rowing.

With only 12 months experience, yet a wealth of ambition and drive, Slatter became a member of the first Australian women’s rowing crew since 1984 to make an Olympic final. At the 1992 Barcelona Olympic Games, the crew finished sixth in the final.

In 1994, Slatter’s bronze medal in the World Championships, and her two silver medals at the Commonwealth Regatta in Canada, solidified her position as one of Australia’s most talented rowers. With her partner Megan Still, they went through 1995 undefeated in national and international competition, culminating in winning the World Championships in Finland. In doing so, the pair became the first Australian female rowers to win a world title in an Olympic rowing event.

Fresh from victory at the Amsterdam International Regatta in June 1996, the pair clinched Olympic gold at the 1996 Atlanta Olympics, becoming the first Australian female crew in history to do so.

When Still retired after winning gold in Atlanta, Slatter was left with four years to find another partner to repeat the feat in Sydney. She chose her new partner Rachael Taylor after rowing with her in the women’s eight boat at various international competitions including the World Championships in 1998. The pair claimed bronze at the 1999 World Championships in Canada behind Romania and Canada.

At the 2000 World Cup in Lucerne, they won silver behind Romanians Georgeta Damian and Doina Ignat and beat the Canadian combination of Emma Robinson and Theresa Luke. At the 2000 Sydney Olympics, the pair won silver in the women’s coxless pairs, with Slatter retiring from the sport soon after.

In 1997 Slatter was awarded the Medal of the Order of Australia (OAM) for her efforts at the 1996 Atlanta Games.