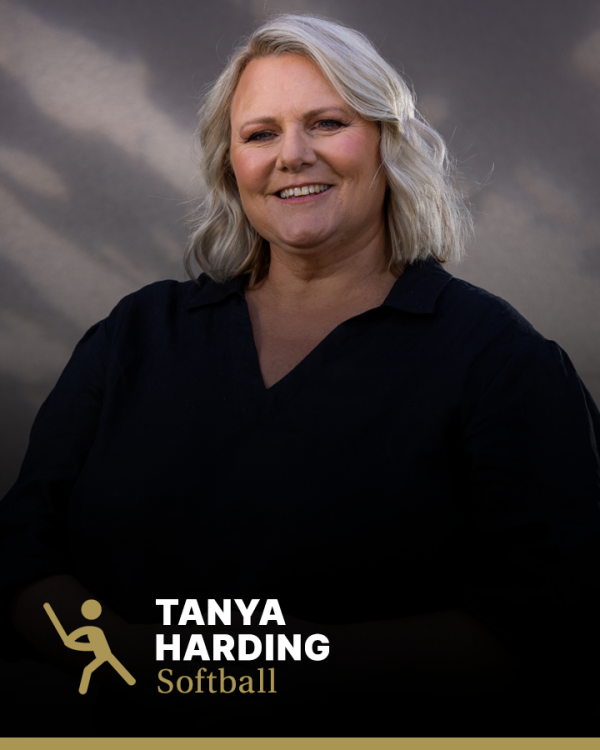 Tanya Harding was inducted into the Sport Australia Hall of Fame in 2022 as an Athlete Member for her contribution to the sport of softball.

A Queenslander who grew up excelling in junior representative teams, Harding went on to become one of the country’s – and one of the world’s – best pitchers in a stellar softball career.

Known for her determination and mental toughness as much as her pitching prowess, she played a pivotal role in helping to make the Australian team a potent force on the world stage.

She was one of three members of the Australian softball team to win medals at four consecutive Olympic Games – 1996, 2000, 2004 and 2008 – winning three bronze medals and one silver medal, with her strong performances against the might of the United States setting her apart from her contemporaries.

Tanya Harding grew up as the youngest of five children in the working-class suburbs of Brisbane, where she excelled in numerous junior representative softball teams.

She left home after her schooling days to seek a specialist coach in Sydney and spent time playing in New Zealand before returning to Brisbane where she played for an amateur team.

Harding won a scholarship to the United States where she helped UCLA to win the 1995 championship, stamping her dominance by winning the MVP in the College World Series.

With softball introduced to the Olympics for the 1996 Atlanta Games, it provided the perfect platform for the Australian team to take on and beat some of the world’s best.

Harding would become an integral part of the Australian softball team which not only competed at four successive Olympics, but won medals – three bronze and one silver – at each of those Games. Along with teammates Natalie Ward and Melanie Roche, she created a slice of history for Australian women at the Olympics with those four consecutive medals.

She was also the first Australian to twice pitch Olympic wins against the United States.

Harding was a member of the Australian softball team which won medals at three world cups with a silver in 1998 and bronze in 1994 and 2006.

A fast and consistent pitcher who could manage speeds of up to 115 kmph and spin the ball as effectively as anyone, Harding was a fierce competitor who was not only a formidable opponent, but also greatly respected by her teammates and rivals.

An indication of her dominance and her longevity was the fact she was named among the world’s top five pitchers for more than a decade. She also competed in a semi-professional sense in Japan for seven seasons, having more success, as she did almost everywhere she played.

She took a leave of absence in 2001 for the birth of her first child, but was back playing a year later to captain Queensland, a role she held until her retirement.

Harding officially retired from international competition after the 2008 Beijing Games, knowing she had given her all for her country in the quest for Olympic glory.

As she would explained: “Representing Australia at the Olympics, apart from the births of my children, was the best experience of my life. (The) Olympics wasn’t originally a goal because it (softball) wasn’t in the Games (when she started), but to represent my country was definitely a goal of mine.”

Her coaches, teammates and rivals agreed on one thing – she strove for excellence with one of her trademarks being her capacity to shine when the pressure was its most intense.

She later helped to nurture the next generation as a coach and a recruiter of new talent in the years after her playing career ended.

Harding was inducted into Softball Australia’s Hall of Fame in 2012 and received one of the sport’s highest international honours in 2019 when she was made a member of the World Baseball Softball Confederation Hall of Fame.