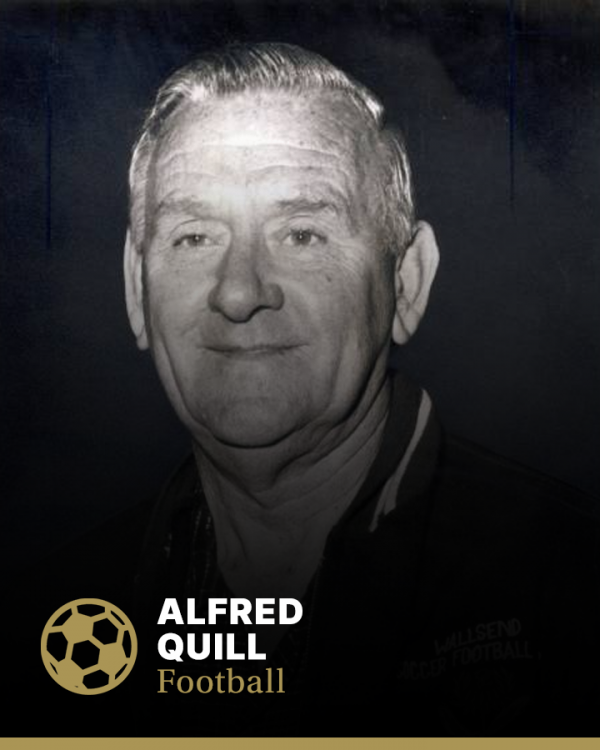 A prolific goal scorer and centre forward, ‘Artie’ Quill’s career spanned from 1927 through to 1949. Born and raised in Ultimo, his 868 goals in senior games is an Australian record. His best was 78 goals in the 1937 season with Wallsendin the strong Newcastle based combination.

Barely 5ft 8in and weighing less than eleven stone, the cultured Quill possessed an extremely agile soccer brain, substituted speed for size and cunning for weight. He excelled when players around him kept the ball ‘on the deck’ and played him quick short passes between opposing full-backs. An outstanding sprinter who once considered a running career, he rarely had trouble in outpacing defenders to score.

The initial sight of the lightly framed Quill hardly induced any great fear to robust defenders of that era. Ninety minutes later these tough no nonsense defenders were left wondering just how this attacker had ‘hoodwinked’ them so often to score magical goals.

He first played with Pyrmont in 1927 and 1928 before joining Annandale-Leichhardt in 1929. Towards the end of 1931 he left for Wallsend. A part time professional, he joined Goodyear in 1934 until 1936 on account of employment offered by Goodyear Tyre and Rubber Pty Ltd. He remained with the ‘rubber men’ for three seasons and in 1937 returned to Wallsend to play out his career, apart from a brief time with the Lake Macquarie Club in 1949.

Quills chances in representative football were always curtailed by the selectors preference for the size and robustness of George Smith. He was chosen for New South Wales in 1930 and, while regularly appearing in Metropolitan or Northern Districts teams for the following six years, it was not until 1937 that he again represented his state.

The match was against England Amateurs and Quill’s containment on the day saw George Smith replace him for the subsequent Test series. The replacement seemed harsh when Quill scored twice and hit the cross bar once in the Northern Districts match against the tourists, a match played just three days after the NSW-England fixture.

Quill nevertheless secured a position in the Australian team during 1938 and 1939. When Smith was selected against Palestine it was the fifth and final Test in what was an already decided series, selectors sparing Quill the tedious trip to Melbourne. Quill was unlucky to play in an era when his style of play was less preferred. In regard to Australian soccer he was at least 20 years ahead of his time for it was only in the 1950s, under the influence of European immigrants, that artistry and finesse began to be more fully appreciated.

Quill represented Australia in some 20 matches against South Africa, Israel, and China during the ASF dispute with the world body FIFA so these matches were not officially recognised. Quill also represented NSW in official games against every other state.

Cricket was another of his sporting interests and he was a member of the Wallsend first grade side for ten years between 1939 and 1949.

After his retirement, Quill coached Wallsend for eight years and coached the Australian national team versus Yugoslavia’s Hadjuk Split FC in 1949. Later, he became manager for the Newcastle KB United Youth Team, when it was in the national league. He was a great ambassador for the sport and was revered by all sports men, often referred to as ‘The Master’.