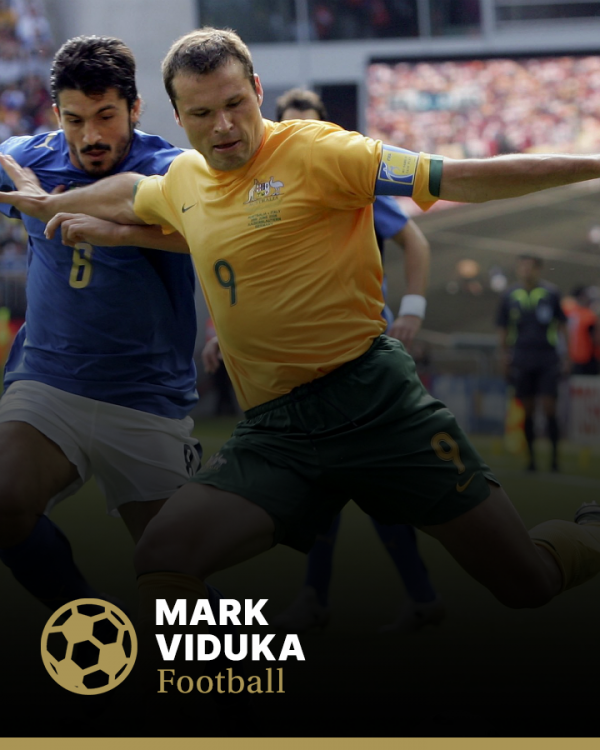 Mark Viduka was inducted into the Sport Australia Hall of Fame in 2021 as an Athlete Member for his contribution to the sport of football.

Mark Viduka was one of Australia’s finest soccer players. He captained the Socceroos at the 2006 World Cup, the only time they have progressed to the second round. He played for Australia 43 times scoring 11 goals.
After two seasons playing 48 matches with 40 goals with Melbourne Knights, in the old National Soccer League, Viduka helped the club win its first title and twice won the Johnny Warren medal for the competition’s best player. He enjoyed a highly successful European career, playing 361 matches and scoring 162 goals for Dinamo Zagreb, Celtic, Leeds United, Middlesbrough and Newcastle United.
He was named Professional Footballers Australia Alex Tobin OAM Medal winner in 2011 and is a member of the Football Federation of Australia Hall of Fame.

Mark Viduka’s professional career started in 1993 at the age of 18 when he joined the Melbourne Knights in the National Soccer League making an immediate impact on the sport. In Viduka’s two seasons with the Melbourne Knights, he took out the Johnny Warren Medal for Player of the Year, Under 21 Player of the Year and the top goal scorer with 16 goals in the 1993/94 season and 21 in the 1994/95 season. This made him one of the only players to take out the treble of awards and doing so twice. Viduka was a part of the team’s first ever Championship in its long history after years of dominance. In only his second year of his professional career, Viduka was named in the Australian team, the Socceroos, for the first time.

Viduka began his international competition journey in 1995 when he relocated to Croatia and represented Croatia Zagreb, now known as Dinamo Zagreb, at the urging of Croatia’s first president Franjo Tudjman. In Viduka’s three and a half seasons in Croatia, he made 84 appearances, scoring 40 goals and was awarded the Best Foreigner Footballer Award during his time at the club. He was an active part in helping the club win three doubles in winning the Croatian First Football League title and the Croatian Football Cup. He departed the club at the end of 1998 to join Scottish Premiership team Celtic. Viduka was a member of the Atlanta 1996 Olympic Games squad, the Olyroos, where he scored the team’s second goal of the tournament. However, the team did not make it past the group stage. Viduka rejoined the Socceroos squad in 1997 making ten appearances that year.

Viduka’s move to Celtic was delayed when he walked out just four days after signing due to stress. He refreshed himself back on home soil in Australia before continuing his career at Celtic. In Viduka’s one and a half seasons with Celtic, he made 37 appearances and scored 30 goals in the Scottish Premier League. In his full season at Celtic, whilst the club finished second on the league table, Viduka took out the golden boot with 27 goals and was named the Professional Footballers’ Association Scotland Players’ Player of the Year making him the first player from outside of Europe to win the award. Viduka was a part of the team that won the 1999/2000 Scottish League Cup, his only trophy there before he moved to the English Premier League. Viduka made his final Olympic appearance at the Sydney 2000 Olympic Games where Viduka played in the three straight losses in the group stage as an over-age member.

The form that Viduka had shown led to, then English Premier League team, Leeds United, signing him to form a partnership with other forwards within the team including fellow Socceroo Harry Kewell. Injuries, however, meant he had to partner with Yorkshire local, Alan Smith. During Viduka’s first season at Leeds, he scored 22 goals including a headline making win of 4-3 against Liverpool in which Viduka scored all four goals, this would see him finish the season as one of the Premier Leagues top goal scorers finishing equal third. In the 2002-2003’s season, he finished fourth in the league’s top goal scorers, with 22, and helped to effectively save the team from relegation in the penultimate game of the season. As Leeds financial woes escalated, Viduka was still leading the teams attacking front until he was eventually sold to Middlesbrough in 2004, following their relegation to the Division One competition. Across Viduka’s early European career he was in and out of the national team since rejoining the Socceroo’s.

He joined Middlesbrough as one of its marquee signings in the view that he and other new additions would assist in the campaign in the European competitions. Viduka’s three seasons at the Northern Yorkshire club continued his rise, even despite an injury-ravaged first season. Viduka’s 2005-2006 season saw him score in all forms of competition; League, National Cup, League Cup and Continental Cup for only the second time in his career. Viduka was among the top goal scorers of the EUFA Cup in 2006 finishing in second place and Middlesbrough would make it to the final the first time the club had made it to a European final. He played his last season at Middlesbrough scoring 14 goals from his 29 matches attracting the attention of rival clubs as his time with the club drew to a close. Viduka finished his season as Middlesbrough’s top goal scorer and fourth in the Premier League among the likes of Cristiano Ronaldo. In 2005, Viduka was named captain of the Australian national team, with his first game as skipper being a dominant 7-0 win against the Solomon Islands in the World Cup Qualifiers. He led the national team to the World Cup for only the second time in the nation’s history, their previous appearance was in 1974 – the year before Viduka was born. Australia made it to round 16, the furthest the men’s team had ever gone. Viduka was also captain during the nation’s swap from Oceania Football Conference to the more competitive Asian Football Conference partaking in the Asian Cup in 2007 where Viduka scored three goals, equal second of most goals.

Viduka signed with Newcastle United for the last two seasons of his career at the top level where he battled through injury and a team struggling to form a strong attacking lineup. He retired from the sport at the end of the 2008-2009 season when Newcastle was then relegated.

Viduka’s senior career saw him score 202 goals in his 409 games at six clubs from the humble beginnings at the Melbourne Knights to being an attacking force in the English Premier League clubs. He retired having won the National Soccer League, National Soccer League Cup, Croatian Football League (twice) and Croatian Cup (twice) and the Scottish League Cup. Individually, Viduka was the league and club top goal scorer on multiple occasions and player of the year in Scotland, as well as a two-time Johnny Warren Medalist. Nationally, Viduka played 43 matches for 11 goals and he led the Socceroos into a memorable World Cup moment. In 2001, Viduka was inducted in the Australian Institute of Sport ‘Best of the Best’. He was awarded the Professional Footballers Australia Alex Tobin OAM Medal winner in 2011, Australia’s most prestigious football honour, for his career achievements and was inducted into the Football Australia Hall of Fame in 2014.