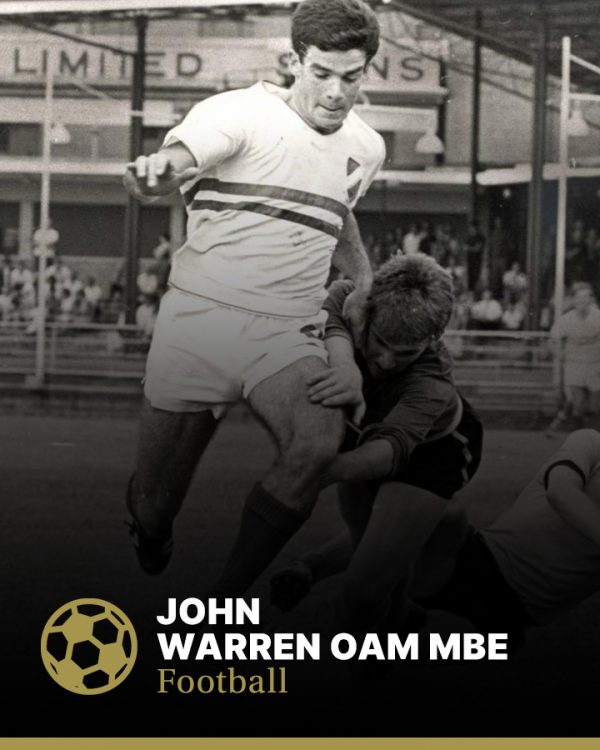 Australia’s “Mr Soccer”, John Warren was by far the most successful home grown product of the game.

He played 46 international matches and represented Australian in 22 different countries. He participated in three World Cup campaigns with the Socceroos in 1966, 1970, and in 1974 when Australian made its first World Cup final series in West Germany. He captained the team from 1967 to 1970.

Warren played First Division at the age of 15 with Canterbury, but he played most of his club football with St George, where he was captain for 12 seasons between 1963 and 1974 and played 297 matches, including eight grand finals, winning four. With Warren as playing coach, St George won the Sydney Championship in 1974.

When a serious knee injury forced his retirement, Warren was Australian’s most admired and internationally known player. A perfectionist, he decided to take up coaching; in 1972, at an international coaching school, conducted by the famous German Dettman Gramer under the auspices of FIFA, he finished dux.

He became founding coach of Canberra City in the Phillips National League in 1977 and 1978. Later he concentrated his efforts on the promotion of soccer, especially with junior coaching schools and with the Sydney City Club.

He was awarded soccer’s Centennial Medal of Honour (the only Australian to hold such an honour) from FIFA President Sepp Blatter in July 2004, recognising his tireless work for football in Australia and was posthumously granted a Lifetime Achievement Award by the Australian Sports Commission.