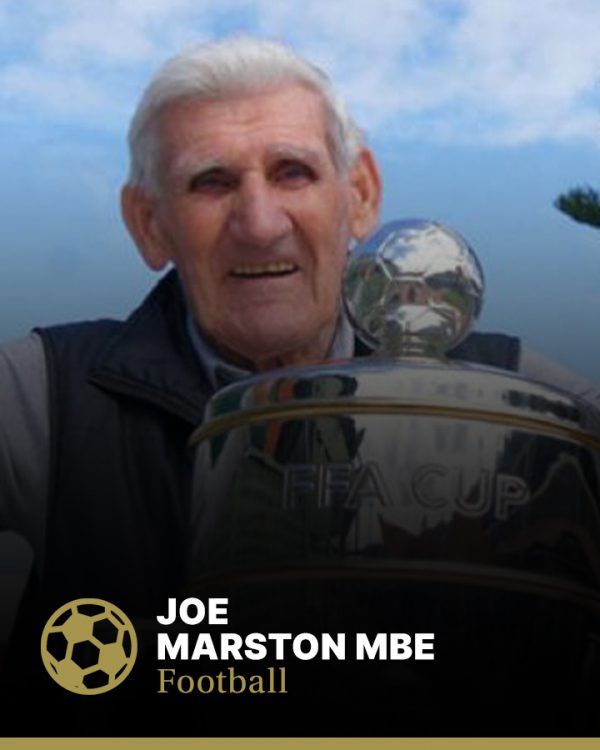 Joe Marston was Inducted as an Athlete Member into The Sport Australia Hall of Fame in 1988 for his contribution to the sport of football.

At 24, Marston played for Leichhardt-Annandale in Sydney, worked at making paint brushes and spent weekends as a surf life saver. In December 1949, Marston received correspondence from a scout in England who had watched him play, informing him that Preston wished to offer him a trial. Their interest was such that they paid for Marston’s wife, Edith, to join him on the journey to England. Australians were scarcely in demand, but Marston had impressed when playing for the national team.

Preston, in Lancashire, was a large old club that had just been relegated to the second division, a rare indignity. At the train station in Preston he was met by several hundred fans and began to grasp the gravity of what he had got himself into. He spent the first year in the reserves, until an injury to Harry Mattinson enabled him to have a run in the first team during the second division title season in 1951. Previously a full-back, he moved to the centre of the defence and never looked back, playing 196 consecutive games. Preston returned to the first division and finished runners-up to Arsenal on goal difference in 1952/53.

Conditions were often harsh, with the players competing in gluey mud, in snow and ice, and sometimes in a gritty smog so thick they could not see the other end of the ground. Marston lived the professional’s life. He was not allowed to ride a motorbike, nor dance after Wednesdays. He wore a collar and tie everywhere.

After three years, the Marstons (now with a daughter) grew homesick for sun and informality. The fans rallied to pay their fare home for a holiday, on the condition that he returned. He did, of course, though in the meantime Arsenal had offered Preston £80,000 for him.

In the 1954 FA Cup, Preston beat Derby, Lincoln and Ipswich to reach the quarter-finals, where they disposed of Leicester City at their third attempt. In the semi-finals they defeated Sheffield Wednesday 2-0 in front of 75,000 on a heavy pitch at Maine Road, Manchester. Preston was abuzz.

In the final in front of 100,000 fans, West Bromwich went ahead, but Preston hit back with two goals, only for West Brom to equalise again. Marston said he was not that bothered because West Brom had several injured players and he was sure Preston would win the replay. But the Midlands side got the winner with less than two minutes to play. The team was devastated.

Marston was made captain of Preston the next year and played for an English League selection against the Scottish League at Hampden Park in 1955. At that time it was almost unprecedented for a foreigner to play for the Football League, which was often the full England side under a different banner. But he was 28, and the pull of home was strong, despite entreaties from fans and a fund started by the Lord Mayor to keep him.

After five successful years in England, Marston returned to Sydney permanently in 1955 and within a week of landing he was made captain of the Australian team. He had toured New Zealand in 1948 and played against South Africa in 1947. He toured New Zealand again in 1958, this time as captain. He played for Apia-Leichhardt and coached several leading clubs, including Sydney Olympic, Auburn, Apia, and Western Suburbs. He also coached New South Wales and Australia.

Marston has returned to Preston only once, when trying to instil professionalism into a Sydney western suburbs team in 1967.

He was acclaimed as the fourth most outstanding footballer of the century in the Oceania region – behind Wynton Rufer, Frank Farina and Christian Karembeu.

The Joe Marston Medal is awarded to the player of the match in the A-League grand final each year. Introduced in 1990, previously the award was also given to the best player in the National Soccer League grand final.

He was made a Member of the British Empire (MBE) in 1980 for his services to soccer and had a bar at Parramatta Stadium named after him when the stadium opened.