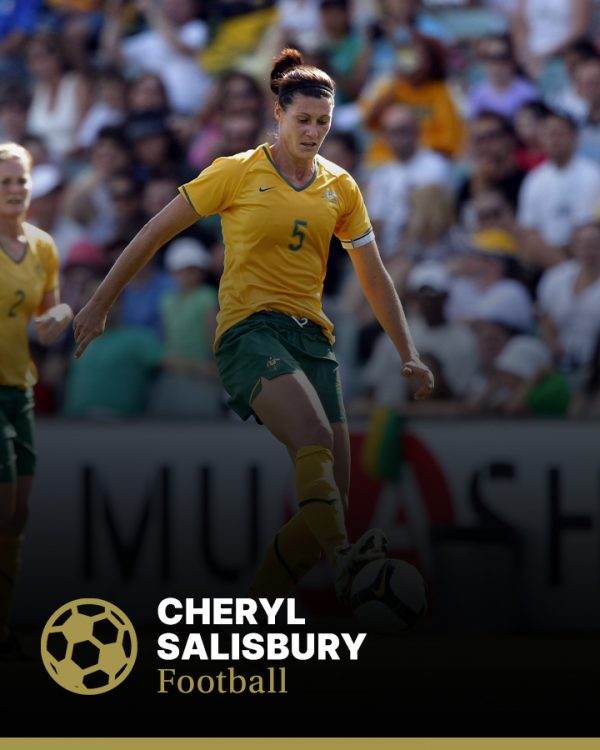 Cheryl Salisbury was inducted into the Sport Australia Hall of Fame in 2019 as an Athlete Member for her contribution to the sport of football.

A pioneer of women’s football, Salisbury became Australia’s most-capped player of either gender and has been credited with being a driving force behind the Matildas becoming a true contender in the world game.

Salisbury played the game at the age of seven with the neighbourhood boys in her hometown of Newcastle because it was “nicer” than rugby league, naively unaware that other girls played it, let alone that women’s football existed at international level.

That changed as she made her way through junior and senior ranks and as a graduate of the Institute of Sport before making her “A” international debut against Russia in 1994, scoring the first of a career total of 38 goals from 151 matches, both of which established national records. She easily out-paced Alex Tobin’s record of 87 for the Socceroos and became only the second woman to play 100 internationals, which she achieved during a 1-1 draw with the United States at the Athens 2004 Olympic Games.

She captained the Matildas for seven years from 2003 until she retired in 2009, having played in four World Cups in 1995, 1999, 2003 and 2007 as well as the Sydney 2000 and Athens 2004 Olympic Games, and the 2006 and 2008 Football Confederation Women’s Asian Cups. At the Sydney Olympics she scored Australia’s first ever goal at that level and at the 2007 World Cup she scored the goal -with effectively the last kick of the game -that secured Australia’s passage to the quarterfinals for the first time.

The world controlling body, FIFA, honoured Salisbury by twice naming her in the Women’s World XI squad in 2004 and 2007.

As well as representing two clubs as a junior and three at senior level, she played for the Memphis Mercury in the 2002 American W-League and for three years in the Japan Women’s League.

Always a trail-blazer in an era when professional football was a pipe-dream for women, she had the determination and the talent to push its case and was one of a handful of Australians who participated in the short-lived American Women’s United Soccer Association (WUSA) playing for the New York Power in 2003, the world’s first fully professional women’s competition and the forerunner of the W-League.

She had the capacity to play in any position and loved to push forward but did her best work as a central defender where she employed a trademark long throw and thumping clearance kick.

She was a fearless leader on and off the field, demonstrating the values of fair play and teamwork.

In 2009 Cheryl Salisbury was inducted into the Australian Football Hall of Fame in the Hall of Champions category and in 2017 she became the first woman to be awarded the Professional Footballers Association’s Alex Tobin Medal, the highest honour for Australian soccer players.