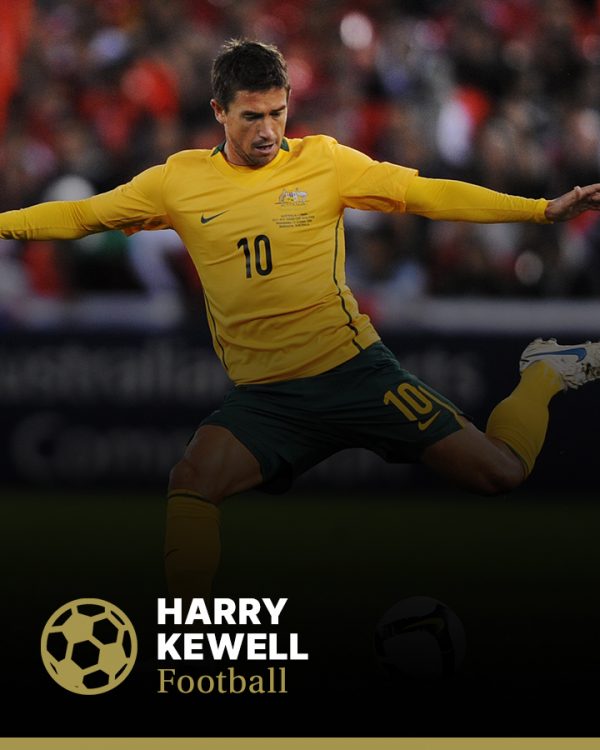 Harry Kewell was inducted into the Sport Australia Hall of Fame in 2018 as an Athlete Member for his contribution to the sport of football (soccer).

At his peak, Harry Kewell was widely regarded as Australia’s greatest international footballer, having been voted as such by fans, players and the media. He enjoyed a long and acclaimed career at the top level for six clubs in four countries and with the Australian national team, the Socceroos, scoring more than 100 goals as a left winger who also played as an attacking midfielder and second striker.

He was a junior star, representing Australia at under 17 and under 20 level after being offered a trial by Leeds United at the age of 15. He played three seasons with the Yorkshire club’s youth team, making his senior debut at 17 against Middlesbrough in March 1996. He played 181 matches for Leeds, winning the Professional Footballers’ Association young player of the year award and making the PFA team of the year, and scoring 45 goals. He then played 93 games for Liverpool — where he was part of the team that won the Champions League in 2005, the first Australian-born player to do so -as well as 63 for Galatasaray in Turkey, three for Al’Gharafa in Qatar and 25 and 16 for Melbourne clubs Victory and Heart.

He became the youngest player to debut for Australia when he played against Chile on April 24 1996, aged 17 years and seven months, having represented Australia in the 1995 Under 17 World Championships. He went on to play in the 1997 Confederations Cup, where Australia finished runners-up, 2004 Nations Cup, which Australia claimed for the fourth time, the 2006 and 2010 World Cups, the 2007 and 2011 Asian Cups, Australia finishing runner-up in the latter. He was capped 58 times for the Socceroos, scoring 17 goals.

His most celebrated goal was against Croatia in the 2006 World Cup when he scored in the 79th minute to draw level at 2-2 and qualify for the round of 16 for the first time. He won man of the match, only the second Australian to do so at the World Cup, behind team-mate Tim Cahill against Japan earlier in the tournament. He scored three times in the 2011 Asian Cup in Qatar, against India, against Iraq deep into extra time in the quarter-final, and against Uzbekistan in the semi-final, Australia winning all three matches but losing the final to Japan.

He played his last match in April, 2014, aged 35, for Melbourne Heart, later to become Melbourne City. In October 2016 it was announced he had been chosen as the recipient of the Alex Tobin Medal, Australia’s most prestigious football honour, for his career achievements. He was an inaugural inductee into the Asian Football Hall of Fame in 2014, was named Oceania Footballer of the Year in 1999, 2001 and 2003, was named in the Asian Cup team of the tournament and in the Asian team of the year in 2011. In 2012, while he was still playing, a panel of former players, administrators and commentators, together with 15,000 public votes, selected him in Australia’s greatest team ever and then named him as the nation’s greatest player ever.