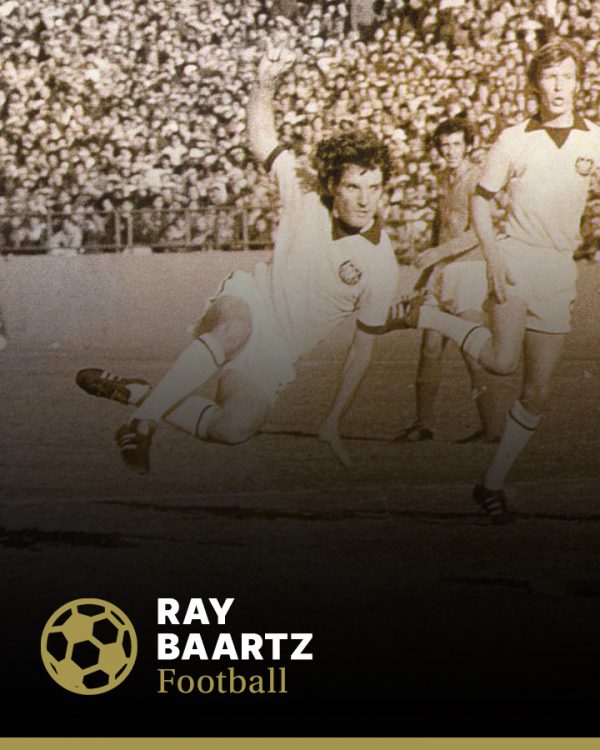 Born in Newcastle and tutored at the Adamstown Club, Ray won a scholarship when only 17 to spend six months with Manchester United. The top English Club was so impressed he was signed for two years and became the Harry Kewell of his time.

He returned to Adamstown in 1966, and the following year transferred to Sydney Club Hakoah on the then record payment of $5600.

In an international career terminated prematurely, Ray Baartz represented Australia 48 times as striker or in the mid-field and created a record by scoring 19 goals.

He played throughout the 1969 World Cup campaign and the 1974 elimination rounds under coach Rale Rasic, helping Australia make the World Cup Final Series for the first time, but a behind play attack in a warm up match against Uruguay ended his dream and his career.

The attack came in the second of two games against Uruguay, which was visiting Australia to prepare for the World Cup finals. The first match in Melbourne had finished in a 0-0 draw and ill feeling boiled over in the Sydney game two days later. Just before half time, Baartz was cut down by a disgruntled Uruguayan midfielder keen for a career in karate. He was hit across the throat behind play and no one saw the incident. The blow struck an artery that swelled and closed, with the reaction later being diagnosed as equivalent to a stroke.

Despite this, Baartz played on and in the second half scored with a 25m rocket described by Rale Rasic as one of the best goals scored by an Australian. Baartz was attacked again later in the game by another player, Luis Garisto, who received a red card for a punch. Australia went on to win 2-0.

The following day, Baartz awoke partly paralysed and was taken to hospital. Doctors were unsure if he would come out alive and it took him two years to fully recover. Despite the blow, the Socceroos demanded their teammate be included in the travelling party to the finals in Germany.

Renowned for his hard shooting with either foot, Ray scored 211 goals in 236 club matches between 1962 and 1974. Ray continued his association with soccer in coaching and administrative positions in Newcastle.