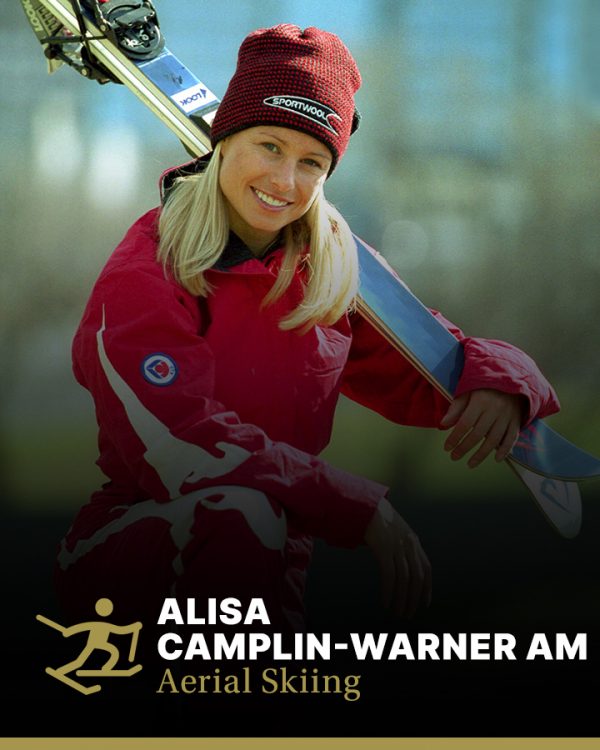 Alisa Camplin-Warner AM was inducted into the Sport Australia Hall of Fame in 2008 as an Athlete Member for her contribution to the sport of aerial skiing.

Camplin-Warner leapt to fame in 2002 with two triple-twisting double somersaults that won her the aerial skiing gold medal at the Winter Olympics in Salt Lake City – Australia’s first ever skiing gold.

Over the next year she confirmed her stature with a world-record, a World championship title and a remarkable seven victories in a single World Cup Grand Prix series.

These were extraordinary achievements for a woman who did not learn to ski until she was 19. For many however, her greatest triumph was a bronze medal at the 2006 Winter Olympics in Italy. Recovering from a series of serious injuries she won her medal having had just 20 days jumping on snow in the previous two years.

Perseverance had been the hallmark of Camplin-Warner’s skiing career.

She was a natural athlete and fierce competitor from an early age. Born in Melbourne in 1974 she was an enthusiastic (and talented) competitor at Little Athletics, then took up gymnastics, winning silver medals in State championships. She also won two national sailing titles in Hobie Cats.

The big turning point came in 1994 when she visited a ski show where organisers had set up a trampoline and harness to allow visitors to try their skill at aerial skiing moves. With her background in gymnastics, Camplin-Warner starred and was encouraged by members of Australia’s fledgling Aerial Skiing Development Squad to take up the sport.

For a full time student, finding the cash for ski lessons and weekend travel and accommodation at the snowfields meant taking on three part time jobs during the week, but for three years Camplin-Warner persevered.

Given her late start at skiing, her first efforts at international competition were unpromising, but progress after that was rapid and she finished seventh in her first Aerial World Championship event in 1999 and fourth in the World Cup finals in 2000/2001.

The following year, 2002, it all paid off. Despite recovering from fractures to both ankles in the lead-up period, at the Salt Lake City Winter Olympics, Camplin-Warner won gold, scoring 193.47 for her triple twisting somersaults. She followed that with a season of Grand Prix successes

The following year was interrupted by illness and a serious stomach operation, and then she snapped the anterior cruciate ligament in her right knee and underwent surgery for a knee reconstruction, including a hamstring graft. After six months of rehabilitation, she began training again and in the 2006 Torino Winter Olympics, won bronze with a score of 191.39.

She has paid a high cost in pain and injury, but Camplin-Warner’s place in sporting history is assured as Australia’s first aerial skiing Olympic gold medalist and surely one of our most courageous athletes in any discipline.