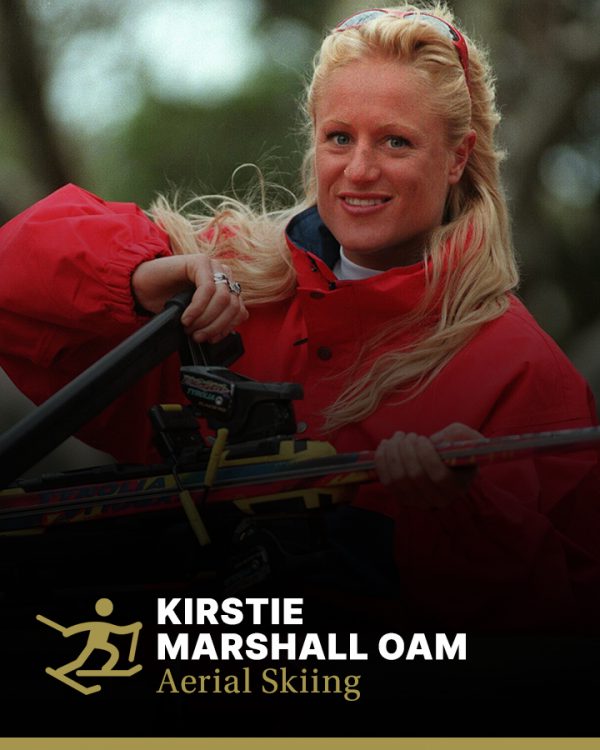 Since retirement she has served her sport as a Board Member of the Olympic Winter Institute.

Kirstie Marshall burst onto the aerial skiing scene. Within two years of taking up the sport she won both her home-state Victorian title (1987) and was runner up in the national championship. The following year she was voted Australian skier of the year after winning the national championships and in 1989/90, in her first season on the international circuit, won her first Word Cup medal.

Her progress thereafter was dramatic. She finished third on points in the 1990 World Cup season, second in 1991 and became world aerial skiing champion in 1992.

Aerial skiing is ferociously demanding on legs and knees and in 1993 Marshall was sidelined with the first of 12 knee operations that were to punctuate her career. She returned to skiing for the 1994 Winter Olympics in Lillehammer, but after qualifying first place, was again hampered by a suspect knee in the final and finished sixth. The following year she finished third in the aerials at the World Freestyle Championship at La Clusaz, France.

Two years later, in 1997, she finally put her stamp indelibly on the sort, talking out the title at the World Championships in Nagano — the first Australian to hold a world title in any winter sport -and setting a new world points record for the event.

A career-ending injury at training the following year ended her chances of taking the record outright, but the path she had blazed and her help in mentoring a new generation of young Australian skiers has seen Australia emerge as a genuine force in aerial skiing, as evidenced by the World Cup success of Jacqui Cooper and the Olympic success of Alisa Camplin.