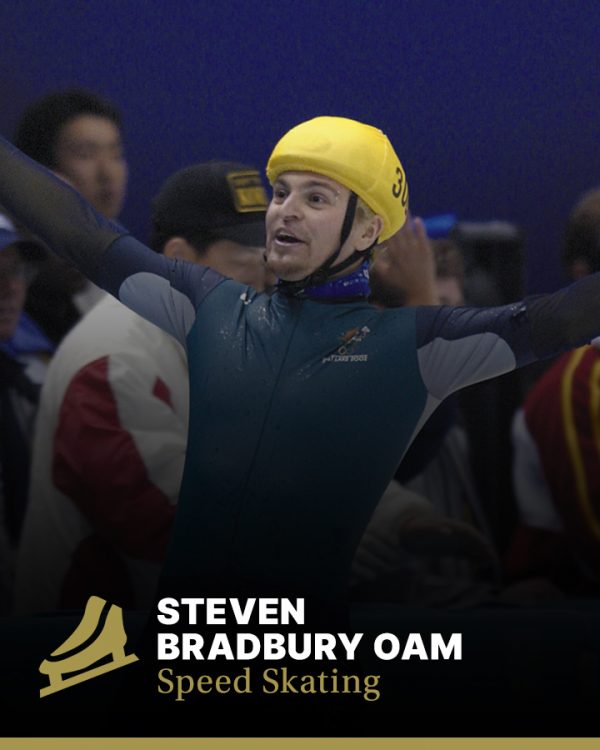 Steven Bradbury OAM was inducted into the Sport Australia Hall of Fame in 2007 as an Athlete Member for his contribution to the sport of speed skating.

Although Bradbury created history in Salt Lake City when he became the first Australian to win a Winter Olympic Gold Medal in the 1000 metre short course speed track skating, in the ten years prior to his victory, he had already proved himself to be one of the best-performed short-track skaters Australia had ever produced.

He was a member of the Australian team that won Australia’s first winter Olympic medal, taking Bronze in Lillehammer as well as finishing in the top ten in the 500m individual event. Steve was a member of the team that won the World Championship relay in 1991 and followed that up with a relay bronze at the 1993 World titles and a silver in the 1994 World Championships.

In 2002 his remarkable and unlikely victory was achieved after a spectacular final lap spill that took out his four rivals. Bradbury threw his arms up in disbelief and smiled as he crossed the line. His gold medal win was not entirely fortuitous as many would believe, as Steven knew his limitations and also the unpredicatable nature of short track racing. He saw his victory as reward for not one race, but for a decade of hard slog that has included more than his share of misfortune. In 1994 a race accident resulted in him losing 4 litres of blood and requiring 111 stitches, and in 2000 a training mishap broke his neck. Steven fought back from both injuries and went on to become the ‘Accidental Hero’ and Olympic Gold medallist in 2002.

Steven has been a wonderful ambassador for the sport, including launching the Revolutionary Boot company which manufactures and supplies may of the top 50 skaters in the world with custom made boots.