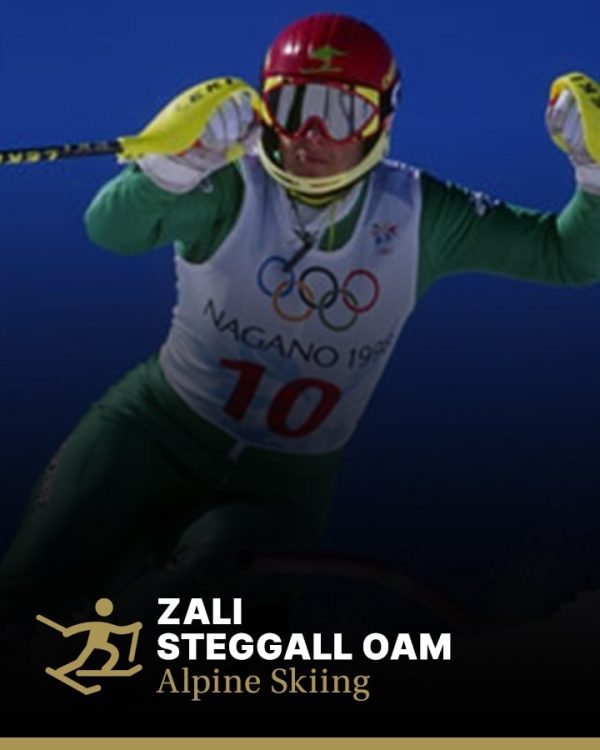 Zali Steggall is Australia’s most successful international skier. Her sporting achievements demonstrate her incredible tenacity, as well as her amazing mental and physical endurance against a highly competitive international field. Steggall’s results at the highest level of competition raised the focus on Australian skiing to an unprecedented level.

With her family having spent considerable time in France during her childhood, Steggall had a long-held interest in ski racing that extended to her new life in Australia. With this background to support her, she went on to win World Cup gold in November 1997 at Park City, USA, becoming the first Australian woman to win a World Cup alpine medal, defeating the world’s most renowned slalom skiers in the process. In 1998, at Mammoth Mountain in the USA, Steggall won silver in the same event. She consequently became the first Australian – and athlete from the Southern Hemisphere – to win an Alpine World Championship title when she won gold in the slalom at Vail, Colorado, in 1999.

Steggall is a four time Olympian, having first represented her country in the 1992 Albertville Games, when she was aged only 17, followed by the 1994 Lillehammer Games. Her Olympic bronze medal at the 1998 Nagano Games was the first skiing medal ever won by an individual Australian at Olympic Games level. Becoming World Champion the following year catapulted her to international spors star status. Her younger brother, Zeke, also made his mark on world sporting circles, becoming Australia’s first Olympic snowboarder ever when he competed in Nagano in 1998.

Steggall announced her retirement from international competition at the 2002 Salt Lake City Winter Olympics. She was awarded a Medal of the Order of Australia (OAM) in 2007 for her services to alpine skiing, and to the community through support for a range of charitable groups.