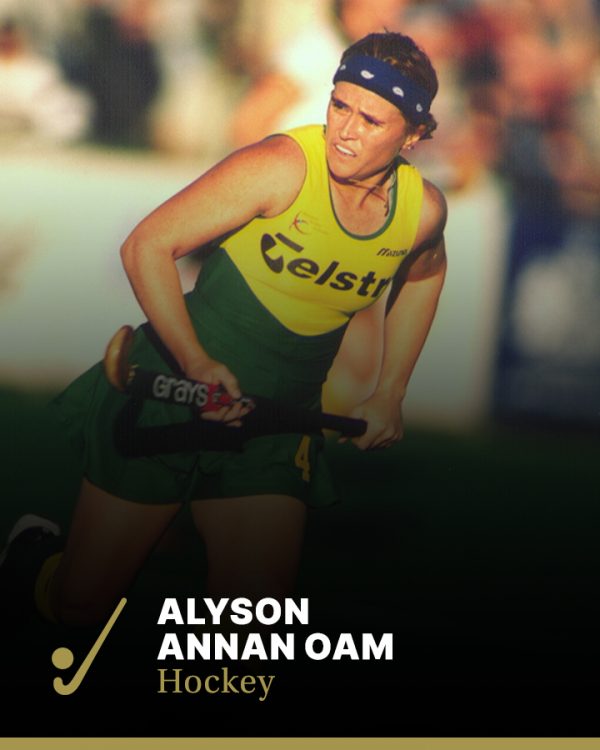 Alyson Annan was born in Wentworthville, NSW. She started her hockey career with the Campbelltown City Women’s Hockey Association, and was an instant star, representing NSW in 1988.

Alyson Annan was a pivotal force in the teams which gave Australian women’s hockey global dominance for almost a decade. These included five consecutive Champions Trophies between 1993 and 1999, two World Cups (’94 and ’98) and two Olympic gold medals (1996 and 2000). She was leading goal scorer at the Atlanta Olympics in ‘96 and at the World Cup in ’98. Few teams in sporting history have enjoyed such prolonged global dominance.

She represented Australia 228 times and her 166 career goals for Australia remain unmatched. Olympic coach Dr Ric Charlesworth described her as “the complete player”.

She made her Olympic debut in 1992 at Barcelona where Australia finished fifth, but thereafter was rarely off the podium in international competition for almost a decade.

Her role in the Australian Hockey team was widely recognized. She was voted International Player Of The Year by the International Hockey Federation in 1998 and 2000, World Sportswoman Of The Year by the Women’s Sport Foundation US in ’98. Among the lengthy list of accolades, Annan was also voted Player of Tournament at the 1998 World Cup and Player of the Tournament at the 1997 Champions Trophy.