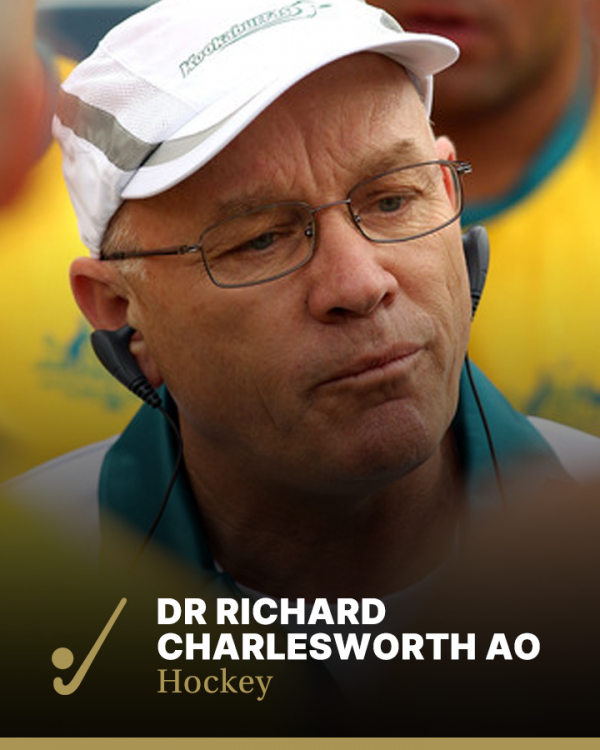 In a remarkable sporting career, Ric Charlesworth has represented his state, Western Australia, and country with distinction. He was selected in five Australian Olympic hockey teams between 1972 and 1988, winning silver in 1976. Playing at inside right, the hallmark of his play was outstanding stick work and a mastery of individual skills; the body swerve, the dribble, the feint, and the ability to beat opponents on either side of his body. On field, the short, sturdily built Charlesworth was noted for his determination, aggression, and high work rate.

Charlesworth represented WA in cricket, captaining the Under 19’s state team in 1969 before playing A grade club cricket. He played in 47 first-class matches for Western Australia from 1972 until 1979, making 2327 runs at an average of 30.22. He captained the WA cricket team in 1979.

In hockey, Charlesworth was selected in the stage under-16 hockey side in 1966 and 1967. At just 18 years of age, he was selected in the state senior hockey team. Between 1972 and 1989 he appeared for WA in 17 national championships. In 1972 he first represented Australia and later that year had his first taste of Olympic competition at the Munich Games.

Four years later at the 1976 Montreal Games, he was part of the Australian team that won silver. The Games were played for the first time ever on synthetic turf, apart from matches throughout Europe on the way to Games. The Australians had had no experience on such a surface, but they relished it. The toughest match of their progress to the final come in a play off with India, after the teams had tied for second place in their pool. After 70 minutes of regulation play, the score was one all. After 16 minutes extra time, nothing had changed, and three 7½ minute passages of sudden death play yielded no result. In a five-man goalmouth shootout Charlesworth had the last shot to give Australia a 5-4 win. New Zealand won the final 1-0 after scoring a penalty goal, the one Australian shot into the net was disallowed as dangerous.

Due to the Australian team boycotting the 1980 Moscow Olympics, Charlesworth next competed at the 1984 LA Olympics, where the team finished fourth, losing to Great Britain in the bronze medal play off.

Expected to do well at the 1988 Games after winning the 1986 World Cup, the Australians were top seeds and looked to be on target for gold when it sailed through its Pool A matches undefeated. Sadly and unexpectedly, it went down 2-3 to Great Britain in a semi-final, and was beaten by the Netherlands for the bronze medal. Charlesworth retired after the Games having played 227 international games and captaining the team for more than 130 games.

Charlesworth was also selected to represent Australia at four World Cups, winning bronze in 1978 and 1982, and one gold medal in 1986 when he was leading goal scorer of the tournament, was selected ‘best player’, and named captain of the world hockey team.

Charlesworth has written two books, “The Coach – Managing for Success” and “Staying at the Top”. He has been a mentor coach to several national team coaches with the Australian Institute of Sport and a performance consultant with the Fremantle Dockers Football Club. On August 23, 2005 he was appointed high-performance manager for the New Zealand cricket team.

In 1987 Charlesworth was made a Member of the Order of Australia (AM) for his services to hockey.