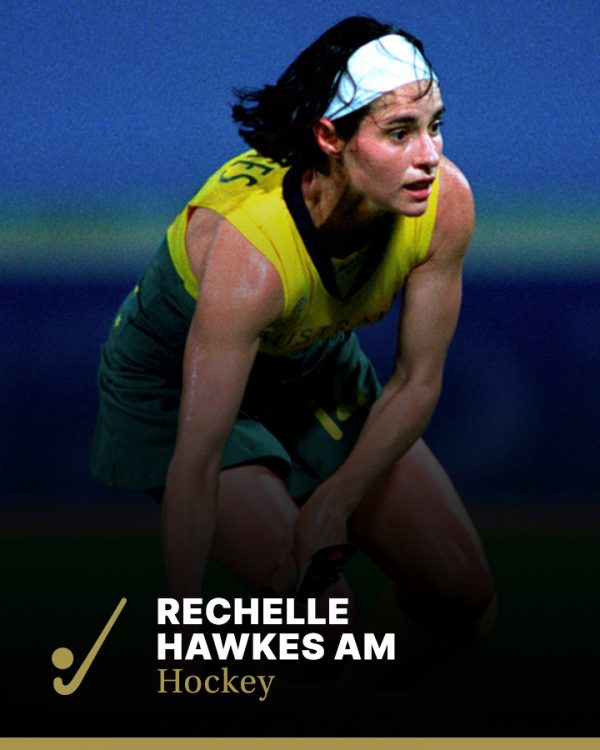 Rechelle Hawkes AM was inducted into the Sport Australia Hall of Fame in 2002 as an Athlete Member for her contribution to the sport of hockey.

When women’s hockey was added to the Olympic program in 1980, Australia was the only nation to have won the gold medal more than once up until 2004. They have done so three times – in Seoul 1988, Atlanta 1996 and Sydney 2000 – and the teams involved have come to be compared with some of the nation’s greatest sporting combinations ever. Only one athlete was a member of all three gold medal teams: Rechelle Hawkes, the veteran of more than 250 international matches.

Making her debut in 1985, Hawkes was captain of the Australian women’s hockey side – the Hockeyroos – for eight years from 1993 to 2000, during which time they lost just one international tournament. Hawkes represented Australia at four Olympic Games, four World Cups, eight Champions Trophy tournaments and one Commonwealth Games.

Hawkes competed in her first Olympics in 1988 and won the first of her three gold medals as Australia eliminated the favoured Dutch team 3-2 in the semi-finals and then beat the home team, South Korea, 2-0 in the final. At the 1992 Barcelona Games, Hawkes experienced the low point of her career when the Australians were upset 1-0 in the preliminaries by the Spanish hosts.

As team captain and playmaker, Hawkes led Australia back to the top in Atlanta in 1996. They entered the final with a 38-game unbeaten streak and then faced the same Korean team that had held them to a 3-3 draw in pool play. This time Australia moved ahead early in the second half and went on to win 3-1.

After celebrating her 250th game for the national team in 1999, Hawkes competed at her fourth Olympics, the 2000 Sydney Games. She was given the honour of reciting the Athletes’ Oath on behalf of all the athletes at the opening ceremony. The Hockeyroos got off to a sluggish start, defeating Great Britain 2-1 and being held to a 1-1 tie by Spain. But from then on, the Australians dominated the tournament, winning their remaining six games by a combined score of 22-3, including the final against Argentina 3-1. After the final she tossed her stick into the crowd and announced her retirement: “It’s time to go. I just don’t want to train anymore.” After 279 international games, Hawkes, the only survivor from the Seoul side, joined Dawn Fraser and Andrew Hoy as a member of the exclusive band of athletes who have won gold medals at three separate Olympics for the same event.

The record of the Hockeyroos during Hawkes’ career with them was indeed daunting. Over 12 years, culminating in the Sydney gold medal, the women won three out of four Olympic tournaments, clinched two World Cups (1994 and 1998), five Champions Trophies (1991, 1993, 1995, 1997, and 1999) and won the first Commonwealth Games title (1998). These results combine to make Hawkes the most successful female player in international hockey history.