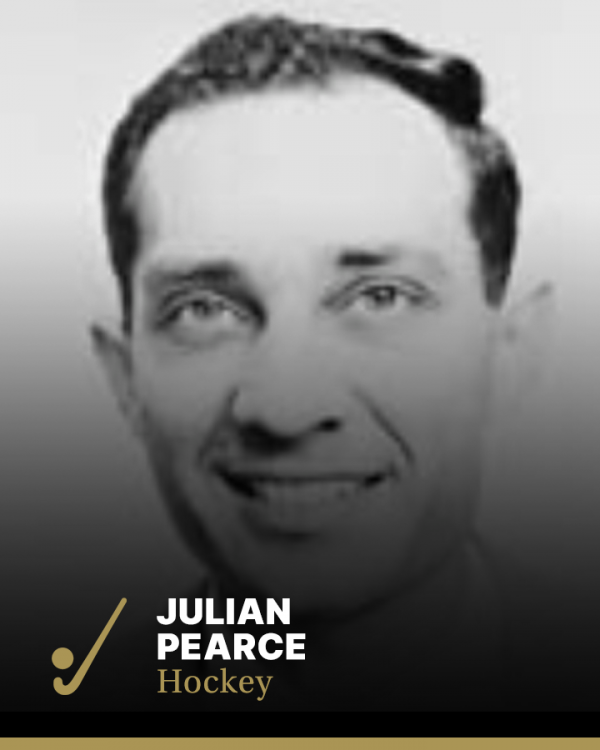 The youngest of five international hockey brothers, Julian Pearce was in a way, the odd man out, proving to be an outstanding defender – his brothers were all brilliant forwards. He competed at three Olympics, winning bronze and silver.

The game of hockey in Australia had benefited dramatically, if indirectly, from the partition of India in 1947. After it happened, a large number of talented players were among families of mainly Anglo-Indian origin who migrated to Western Australia. One such household included the five Pearce brothers, Eric, Julian, Gordon, Mel, and Cec, who made an enormous contribution to the development of the game; all but Julian learned to play the game in India, all played for Australia at various times, and they have had the unique experience of all five representing their state in an Australian Championship at the one time. All except Cec were Olympians, having retired before the Melbourne Games in 1956.

His Olympic efforts brought a sixth placing for Australia at the 1960 Rome Olympics, bronze at the 1964 Tokyo Olympics, and silver at the 1968 Mexico City Olympics. He shared his first and last successes with Eric and Gordon, while only Eric accompanied Julian to Tokyo.

The Olympic year of 1960 was Julian’s first taste of international hockey and he followed up with a tour to India in 1962 for a special 10-nation tournament – the forerunner of today’s World Cup Championships.

Tall and solidly built he was regarded as one of the finest defenders in the game, fearless and skilful as he often set up attacks for his brothers.