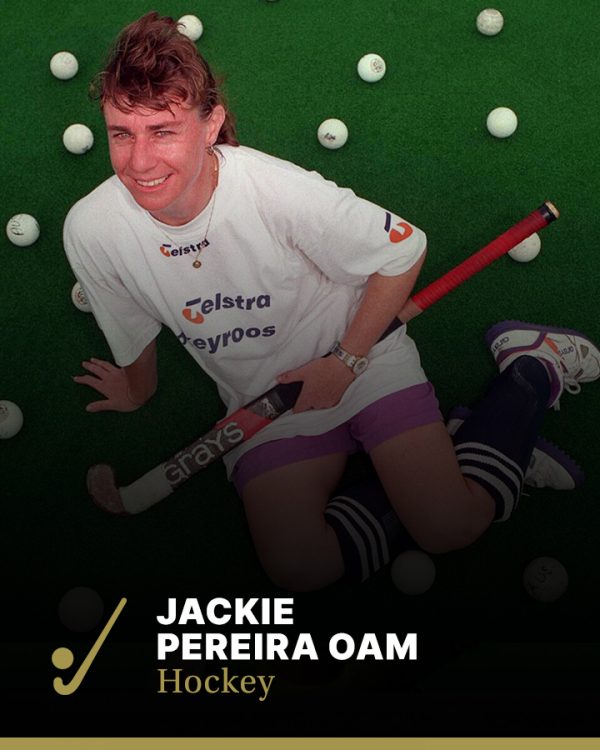 Jackie Pereira OAM was inducted into the Sport Australia Hall of Fame in 1998 as an Athlete Member for her contribution to the sport of hockey.

Pereira was first selected for the Australian senior team in 1986 for the Esanda 6 Nations Tournament in Sydney. That same year she played in her first of three World Cups in Amsterdam, where the team finished sixth. Four years later, the Cup was held in Sydney where Australia lost to the Netherlands in the final. Out to prove a point in 1994 in Dublin, Australia finally won the World Cup by beating Argentina.

She was an integral part of the victorious Australian women’s hockey team that retained its world number one ranking by taking out the Champions Trophy in Argentina in 1995 by defeating Korea 1-1 (4-3 in the penalty shootout). The win was historic, making Australia the first nation to win the Champions Trophy three times and also in consecutive events; in 1991 Australia beat Germany (in Berlin), and in 1993 Australia beat the Netherlands (in Amsterdam) 1-1 (4-2 in the penalty shootout).

In her 144th Test, Pereira reached a personal historic milestone when she scored her 100th international goal – the first Australian female to do so. This made her the greatest goal scorer in the world in the post-war era as a player who scored all her goals from the field (ie. not from converting penalty corners or penalty strokes).

Following her performance at the 1996 Olympics, Pereira retired from international competition, and at the end of the 1997 Telstra season, retired from playing hockey at a national level.

In 1989 Pereira was awarded the Medal of the Order of Australia for her service to hockey.