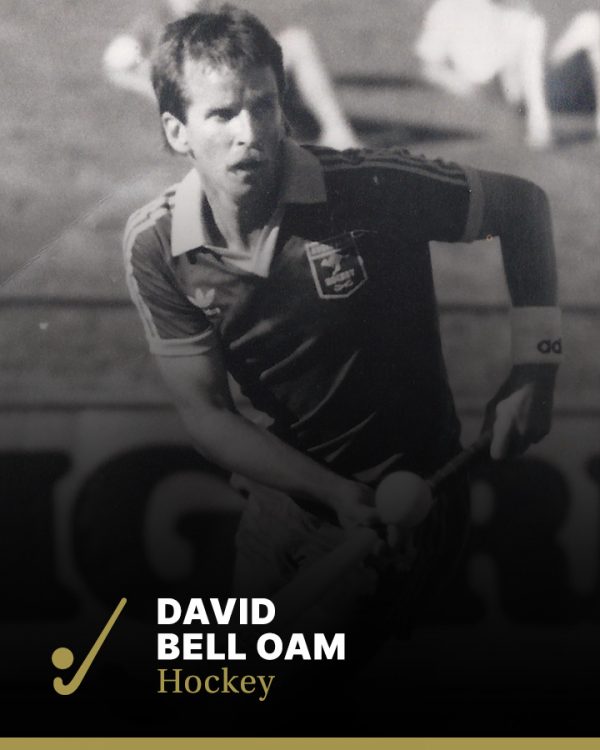 David Bell OAM was inducted into the Sport Australia Hall of Fame in 2004 as an Athlete Member for his contribution to the sport of hockey.

Bell played 186 matches and scored 20 goals in an eleven year (1975 to 1986) international career that included three Olympic Games, four World Cups and nine Champions Trophy tournaments. He is one of the legendary figures associated with men’s hockey in Australia. He was an exceptional tactician, a popular captain and respected internationally by both players and umpires for his sincere sportsmanship.

But the memorable and truly outstanding part of Bell’s hockey was his extraordinary level of skill. His skills were such that he became reputed as a player who could ‘change the course of a game’. He could perform skills that other players could not and invented skills and plays that were previously unrealised and are emulated today by the best hockey players worldwide.

Bell first competed at the Olympics in 1976 at Munich where the Australian team won silver. The Games were played for the first time ever on synthetic turf, apart from matches throughout Europe on the way to Games. The Australians had had no experience on such a surface, but they relished it. The toughest match of their progress to the final come in a play off with India, after the teams had tied for second place in their pool. After 70 minutes of regulation play, the score was one all. After 16 minutes extra time, nothing had changed, and three 7½ minute passages of sudden death play yielded no result. In a five-man goalmouth shootout Ric Charlesworth had the last shot to give Australia a 5-4 win. New Zealand won the final 1-0 after scoring a penalty goal, the one Australian shot into the net was disallowed as dangerous.

Due to the Australian team boycotting the 1980 Moscow Olympics, Bell next competed at the 1984 LA Olympics, where the team finished fourth, losing to Great Britain in the bronze medal play off.

According to Richard Aggiss, head coach of the Australian men’s hockey team from 1981 to 1988, “the impact of David Bell on a hockey game was felt the day he didn’t play. A mild injury to Dibsy (Bell) made me elect to rest him on the day we played the semi-final at the LA Olympics -and that’s a decision I’ll regret ‘til the day I die.” Aggiss made a late decision to bring Bell into the match, turning the game around immediately, but it was too late. Australia went on to be beaten and thus miss the gold medal playoff. To this day, Aggiss firmly believes that had he played Bell for the full game, Australia would have won the match.

Bell was made captain of the Australian team in 1984 and for four years, the team enjoyed success around the world.

After retiring from the game in 1987, Bell moved into coaching. He made rapid progression up the ranks of elite coaching, moving from appointments with WA representative teams to a national post with the Australian Institute of Sport program in 1997. In 2001 he commenced his role as head coach of the Australian women’s hockey team, the Hockeyroos, and retired from the position in 2004. During his time as coach, the Hockeyroos won bronze at the 2002 Manchester Commonwealth Games, gold at the 2003 Champions Trophy, and bronze at the 2001 Champions Trophy. He is currently Coaching Manager with Hockey Australia.

In 1987 Bell was awarded the Medal of the Order of Australia (OAM) for his services to hockey.