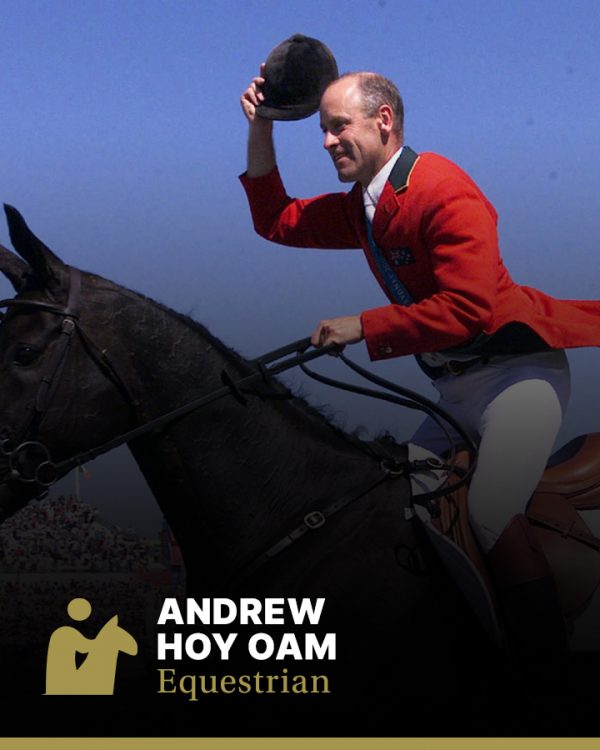 Andrew Hoy OAM was inducted into the Sport Australia Hall of Fame on Thursday, November 30, 2000 as an Athlete Member for his contribution to the sport of equestrian.

Andrew Hoy has the rare distinction of having attended eight Olympic Games between 1984 in Los Angles until 2020 in Tokyo. At his eight Olympics Hoy has won in the eventing competition three gold medals and a silver in the team eventing and one silver and a bronze in the individual eventing. His three Olympic gold puts him in the exclusive company of athletes who have three gold medals in the same event.

Outside of the Olympics, Hoy has won two bronze world championship medals in eventing and four CCI five star events in the Badminton Horse Trials, Burghley Horse Trials and the Kentucky Three-Day Event.

Growing up on the family farm in Culcairn, country New South Wales, Hoy started riding from a young age and had his first competition at the age of seven riding a horse borrowed from his uncle.

In 1980 Hoy was selected to attend the Moscow Olympic Games however, the sport was withdrawn due to the largest boycott in the history of the Olympic movement. In response to the widespread boycott, the International Federation for Equestrian Sports (FEI) allowed those nations who didn’t attend Moscow to compete in the International CCIO event at Fontainebleau. This event was officially dubbed the ‘Alternative Olympics’ and the Australian team finished with a bronze medal.

Hoy made his official Olympic debut at the 1984 Los Angeles Games riding his faithful Davey where they came 15th, the best placed of the Australian Team. Hoy’s Australian Eventing team finished fifth. Following the Olympics, Hoy traveled to the United Kingdom where he competed at the British National Championship finishing in second place.

At the 1986 World Eventing Championship held in Gawler South Australia, Hoy, riding Just James, and his fellow teammates; Scott Keach and brothers Barry Roycroft and Wayne Roycroft finished the competition with a bronze medal. Hoy was selected for his second Olympics at the 1988 Seoul Olympics riding Kiwi. The Australian Eventing Team finished the three days in fifth spot and Hoy, the best placed, in eighth.

Hoy rode Kiwi at the World Equestrian Games in Stockholm Sweden in 1990 where the Australian team finished outside the top eight and Hoy retiring from the competition. He then took Kiwi to the 1992 Barcelona Olympics where they finished fifth in the eventing competition and the Australian team won the gold medal for the first time since the 1960 Rome Olympics.

After the 1992 Olympics Hoy based himself in Europe competing in major three-day events around the United Kingdom. In 1994 Hoy rode Australian bred gelding, Darien Powers and they won the CCI two star at Le Lion d’Angers in France. In 1995 Hoy and Darien Powers continued their winning ways across Europe and the Olympics for the Atlanta Games. Darien Powers was considered one of the world’s finest young eventing horses at the time.

In the 1996 Atlanta Olympic Games the Australian team followed their success four years prior with another gold medal in the team eventing, Hoy rode Darien Powers for the team but finished eleventh for the individual rides on Gershwin. The following year Hoy on Darien became the first Australian to win the British Open title.

In the lead up to the Sydney Olympics, Hoy had an injury interrupted 1998 before finishing the 1999 season as the Professional Event Riders’ Association top-ranked eventing rider on strike rate at Three and Four-Star level. Darien Powers achieved several record points for the dressage prior to the Olympic games.

At his fifth Olympics, Hoy rode Darien Powers in the team eventing where they achieved another record in points for the dressage leg. The team finished with gold, the third time in a row Australia had won the event. Hoy being a part of the team joined, at the time, just Dawn Fraser to win a gold medal in the same event at three successive Olympic Games. This record saw the crowd members chanting: “Aussie, Aussie, Aussie, Hoy, Hoy, Hoy” in recognition of what had occurred. The Individual eventing saw Hoy riding Swizzle In finish with silver only 5.8 points behind the gold medal.

2002 saw Hoy compete at the World Equestrian Games which saw him eliminated in the individual eventing and the team finish in fourth position. The 2004 Athens Olympic Games saw Hoy competing on a more personal level with his wife Bettina who was awarded gold until it was later stripped on appeal to the Court of Arbitration for Sport. Hoy himself finished in fifty seventh position riding Mr Pracatan individually and the team in sixth spot. Hoy won his second Burleigh Horse Trial on Moon Fleet twenty-three years after his first win on Davey.

Hoy finally broke through in 2006 to win the prestigious Badminton trial, another of the six prominent CCI five-star events, it had been his seventh attempt previously finishing tenth in 1996, ninth in 2000, eighth in 2002, seventh in 2003, fifth in 2004 and third and sixth in 2005. At the World Equestrian Games that year he competed on Master Monarch finishing individually in twenty second place and the team with a bronze. Hoy had won the Kentucky Three-Day Event the same year he had won the Badminton Trial, completing a broken up Grand Slam of Three-Day Events having won the Burghley, Kentucky and Badminton trials across his career.

Hoy missed the 2008 Beijing Olympics however he attended his seventh Olympics once he was selected for the London 2012. Riding Rutherglen, Hoy finished in thirteenth position on the individual competing and Australia in sixth.

Hoy made his return to the World Equestrian Games in 2018 riding Vassily De Lassos, he achieved his best individual result at the games achieving fourth position and the team finished in sixth. The event had served as a qualification event for the 2020 Tokyo Olympic Games.

History was made when Hoy was selected for the Australian eventing team, an Australian record for attending the Olympics being Hoy’s eighth games. At the Olympics Hoy performed the best from the team getting the opportunity to ride for individual gold finishing with the bronze medal behind Great Britain’s Tom McEwen with silver and Germany’s Julia Krajewski, the first individual gold medallist of eventing. The Australian team finished the competition with the silver medal Hoy’s medals saw him become the oldest Australian to medal at the Olympic Games.