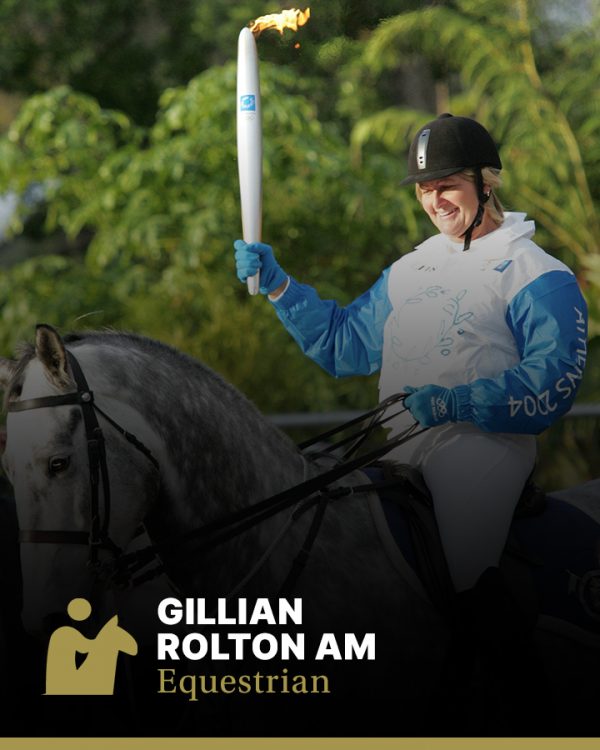 Gillian Rolton AM was Inducted into The Sport Australia Hall of Fame in 2000 for her contribution to the sport of equestrian.

Gill was given her first horse at the age of ten, and began riding competitively soon after.

With gold from the 1992 Barcelona and 1996 Atlanta Olympic Games, Gill was one of Australia’s most accomplished riders and the first Australian female to medal in equestrian.

Gill started her eventing and show jumping career at the relatively late age of 21. Her first eventer, Saville Row, was purchased for the princely sum of $200. It was not long until the duo charged up the eventing grades and were soon long-listed for the 1984 Los Angeles Olympics. Unfortunately, Saville Row sustained a leg injury at the final selection trial and the team missed out.

Nevertheless, Gill had been given a taste of the Olympic dream. In 1988, riding Benton’s Way, Gill was on the verge of selection for the Seoul Olympics before she dislocated her elbow only days before the final selection trial, her Olympic success would have to wait.

In 1992 it was third time lucky! She was a late inclusion in the Barcelona 1992 team, with Peppermint Grove, after beating all male members of the team in the final selection trial at Savernake, England. At the Olympics, the Australians, Matt Ryan (who also won the individual event), Andrew Hoy and Rolton, were in second place behind New Zealand for the final team jumping phase. One New Zealand rider had a disastrous round, and the Australians all rode with poise to win gold.

After winning the Australian championships in 1995, Gill returned to the Olympic scene in 1996 with Peppermint Grove, keen to snare her second gold.

Gill ended the 1996 Atlanta Games with a broken collarbone and broken ribs – and her second consecutive gold medal. She was a member of the winning three-day equestrian event team, along with Hoy, Phillip Dutton and Wendy Schaeffer. She suffered her injuries when Peppermint Grove fell and skidded during the endurance phase of the event. She remounted, unaware that she had suffered the fractures, and rode on, now unable to use her left arm. She and the horse came down again at the next obstacle, a water jump, and she somersaulted into the water. She then waded out, boarded the horse again, and galloped for another three kilometres, clearing 15 more fences, to finish the course. An ambulance took her to hospital, where she refused pain-killing drugs because she felt she might be needed for the final team jumping round the next day. She wasn’t, but Rolton’s gallantry served as an inspiration to her fellow riders, and the entire Australian team

In 2000 Gill made a bid to qualify for her third consecutive Olympics. Riding a new, inexperienced horse, Endeavour, Gillian narrowly failed to gain selection, but was honoured to help carry the Olympic flag in the opening ceremony.

Gillian Rolton AM died at the age of 61 on Saturday November 18th 2017 after a two year battle with endometrial cancer.