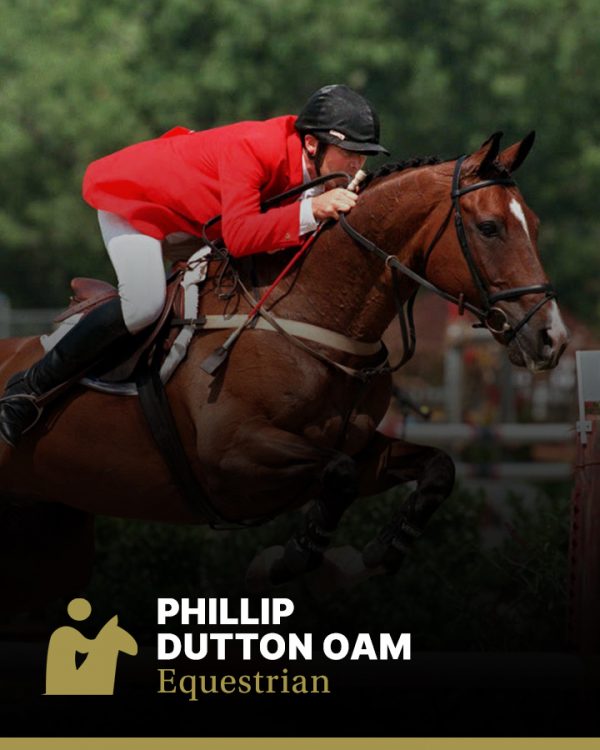 Phillip Dutton OAM was inducted into the Sport Australia Hall of Fame in 2001 as an Athlete Member for his contribution to the sport of equestrian.

Phillip Dutton grew up in country New South Wales where horses were a part of life on his family’s sheep and wheat farm. Most of Dutton’s time off the farm was spent at pony club rallies and horse trials and he continued to pursue his passion for riding while studying in Sydney at Newington College and later at Agricultural College. He has been chosen to be part of the Australian three-day team in every international competition since the World Equestrian Games in 1994.

He made his international debut at the 1994 World Championships in the Netherlands before competing at the 1996 Athens Olympics, where he was a member of Australia’s gold medal three-day eventing team. He felt a little ‘left out’ after finishing the competition without breaking anything, unlike his team mates who had broken several limbs. He also won gold at the 2000 Sydney Games in the three-day eventing team and finished 13th in the same event at the 2004 Athens Games. He was flag bearer for the Australian team in the opening ceremony of the 2006 World Equestrian Games in Germany.

Dutton manages and trains out of True Prospect Farm, in West Grove, Pennsylvania. He dedicates a good deal of his time to coaching other riders. He coached the US Area II Young Riders in 2001 and 2002. He also coaches many adult amateurs and a number of the USET short listed riders.

In 1997 he was awarded the Medal of the Order of Australia (OAM) for his service to sport as a gold medallist at the 1996 Atlanta Olympic Games.