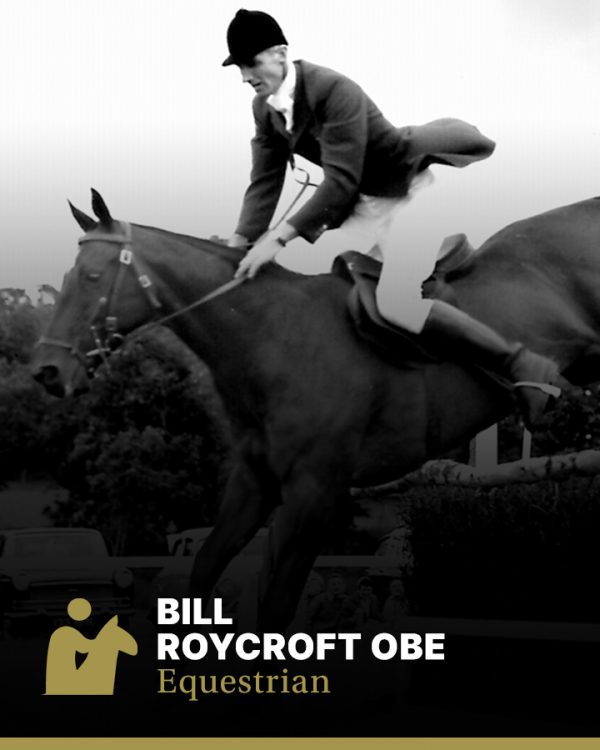 Bill Roycroft was Inducted into The Sport Australia Hall of Fame in 1985 as an Athlete Member for his contribution to the sport of equestrian and was Elevated to “Legend of Australian Sport” in 1996.

Roycroft is one of only five Australians to have competed in five Olympic Games. He represented Australia in Rome 1960, Tokyo 1964, Mexico City 1968, Munich 1972 and Montreal 1976.

Roycroft developed his superb horse riding skills as a boy growing up in a poor farming family in rural Victoria and worked as a farm worker in the tough conditions of the Great Depression. After serving in the Second World War, he became a soldier settler with a young wife and family. These early struggles prevented Roycroft from pursuing his dream, and it wasn’t until 1960 that he competed in his first Olympics.

The deed for which he will forever be renowned occurred at the 1960 Rome Olympics.

It was on September 11, 1960, that three horsemen from the outback gave Australia a new kind of Olympic glory. They came from farms to do combat with cavalry officers and fox hunters, people who had learnt their skills in formal riding schools rather than in lonely paddocks, and they brought with them horses that had been bred in the bush. They sailed with them for nearly six weeks to London in a cargo ship, flew with them to Rome, and for 20 days before and during the Games, they journeyed 142km a day to ride them. Between the three of them, those riders won two gold medals and one silver, the first Australia had achieved in equestrian events. Laurie Morgan, a grazier who had once been a ruckman with the Fitzroy Football Club in Melbourne, won the individual three-day equestrian event. Neale Lavis, a former rodeo rider who farmed cattle, finished second to Morgan in the individual event, and shared the team’s gold. Roycroft made a painful journey to legend, bailing himself out of hospital to ride through a series of jumps -enabling the team to win gold.

Roycroft had cleared 30 jumps when his bay gelding, Our Solo, misjudged a leap over large pipes and somersaulted on top of him. He was badly concussed, with extensive bruising and muscle damage, but he climbed groggily back on his mount and cleared four more obstacles to finish the course, still with one of the fastest times of the day. He was then given oxygen (and whisky) and flown by helicopter to a hospital outside Rome, where he was sedated, strapped up and packed partly in ice. With one day to go, Australia thus had four high point-scorers, and a strong chance of winning, but only two fit combinations, Morgan on Salad Days, and Lavis on Mirramooka. Brian Crago was uninjured but his horse had broken down and the rules would not permit a change of horses. To win, Australia needed three finishers.

When he learned of the predicament early the following morning, Roycroft announced that he was signing himself out. When doctors said no, and refused to give him his clothes, he threatened to leave the hospital in his underpants. Finally, Laurie Morgan’s brother, who was attached to the Australian embassy in Rome, used his influence to have him discharged – on condition that he signed a document taking responsibility for his own safety. He was 45 years old (as was Morgan), laced heavily with pain killing injections, unable to bend, and as the time approached for the last ride, his teammates had to dress him in his riding gear. Then he was virtually folded onto Our Solo, the reins were placed in his hands and his spurs adjusted. He had no power in his right hand and, holding the reins lightly, guided Our Solo with his left. Stiffly but flawlessly, he cleared the round of 12 jumps, ensuring gold for Australia and a place in history for himself.

This Olympic career which Roycroft launched in middle age continued through four more Games, winning team bronze at the 1968 Mexico City and the 1976 Montreal Olympics (at 63 years of age), and the distinction of carrying the Australian flag in Mexico City. It also yielded a small dynasty; four more Roycrofts rode in later Games, sons Barry, Wayne, and Clarke, and Wayne’s wife Vicki.

Roycroft became an Officer of the Order of the British Empire (OBE) in 1969 for his service to sport, and was awarded an Order of Merit by the Australian Olympic Committee in 1978 for his outstanding achievement in sport. He helped carry the official Olympic flag into the stadium at the 2000 Sydney Olympic Games along with seven other Australian Olympians.