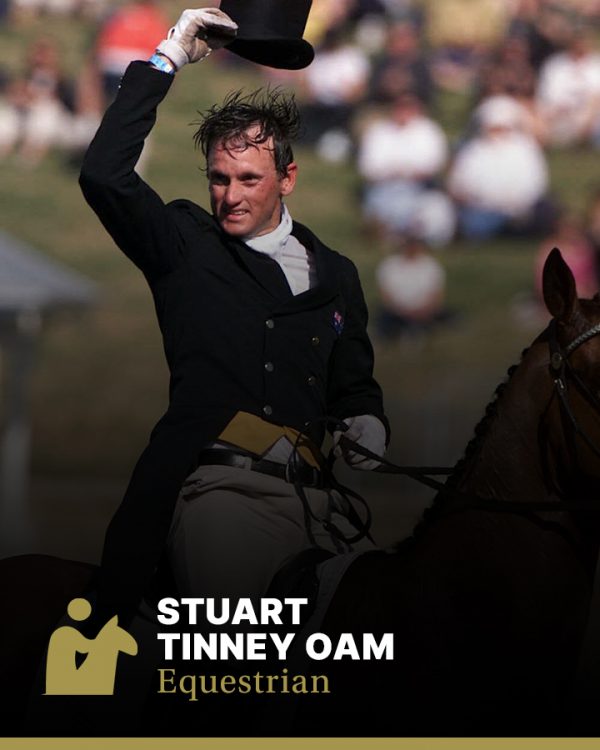 Stuart Tinney OAM was inducted into the Sport Australia Hall of Fame in 2003 as an Athlete Member for his contribution to the sport of equestrian.

Tinney was the only Australian-based rider in the Australian Three-Day Event Team at the 2000 Sydney Olympic Games. The other three members (Phillip Dutton, Andrew Hoy, Matt Ryan) were based in either Great Britain, or the United Sates of America.

It has long been the belief that to ‘make it’ in the sport of Eventing, one must pack up and move to the other side of the world. At the Sydney Olympics, Stuart Tinney proved this theory wrong. Not only was he selected as a member of the Australian team, he led that team to the gold medal dais. Tinney’s score left him individually in first place. His performance was better than anyone else in the world. Under the old rule, Tinney would have been awarded also an individual gold medal.

Tinney represented Australia again at the 2004 Athens Olympics and has also competed internationally at the World Equestrian Games, and at Badminton, recording a ninth placing as the team rider on Jeepster at the 1988 Equestrian Games.

Tinney remembers his performance out of the saddle at Badminton in 1999 as the most embarrassing moment of his life. He jumped into the crowd and had the resulting photos published in newspapers and sporting magazines all over the world.

Over the past two decades Stuart, with support from his wife, Karen, has created a reputable equestrian business training horses and riders for the Olympic disciplines. Stuart is an accredited level three coach (the highest possible). Many elite riders under the Tinney tutorage have progressed on to represent their country.

In 2000 Stuart was awarded the Medal of the Order of Australia (OAM) for his services to the sport of equestrian.