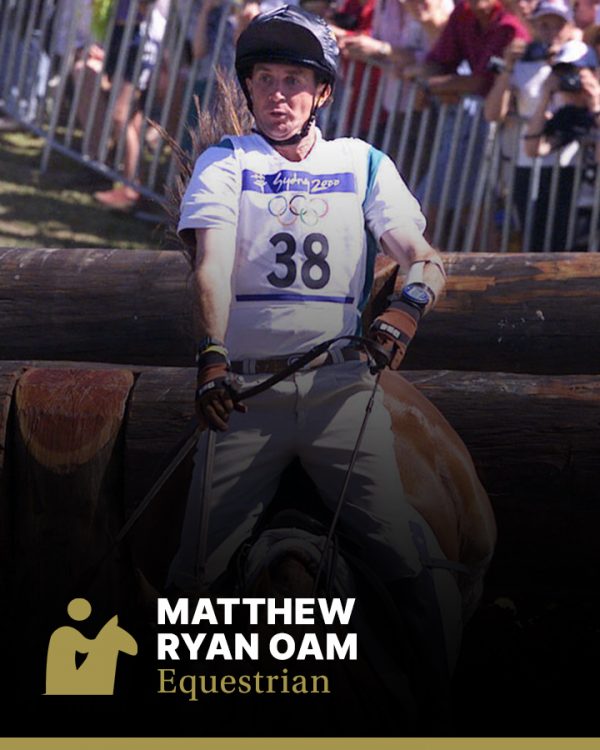 Matt Ryan became the last Australian equestrian competitor to capture two Olympic gold medals in a single event when he won both the individual and team three-day event at the 1992 Barcelona Games (Lawrence Morgan had won gold the same way in Rome 1960). From 1912 to 1992 the two events were run concurrently, but from 1996 they were divided. Ryan, a former jackeroo and a draughtsman from Maitland, New South Wales, went on to become a triple gold medallist at the 2000 Sydney Olympics.

He first collected gold in the team event in 1992 with Andrew Hoy and Gillian Rolton. At the end of the endurance phase, the New Zealand team had a strong lead over Australia, and seemed likely to extend it in the final team jumping round. Ryan was considered by some to be suspect in this discipline, having knocked over five fences while qualifying for the Games at the prestigious Badminton event in England. The rival who was fancied to beat him, New Zealand’s Andrew Nicholson, dislodged nine fences – the most of any competitor – and finished 16th. This meant that if Ryan could clear all but one jump, Australia would win both gold medals. Despite the pressure, Ryan and his mount Kibah Tic Toc, cleared all but the last obstacle. The double win meant that Ryan improved his world ranking in the three-day event from 11th to 3rd.

Ryan was chosen to represent Australia at the 1996 Atlanta Games but was forced to withdraw due to unsoundness of his mount at the last minute. Four years later in Sydney 2000, Ryan combined with Hoy, Phillip Dutton and Stuart Tinney to win the team event. The quartet led the competition from beginning to end. Afterwards they galloped through three victory laps, to the strains of the theme from “The Man From Snowy River.”

In 1993, Ryan was awarded the Medal of the Order of Australia (OAM) for his service to sport as a dual gold medallist in the equestrian three-day individual and team events at the 1992 Barcelona Olympic Games.