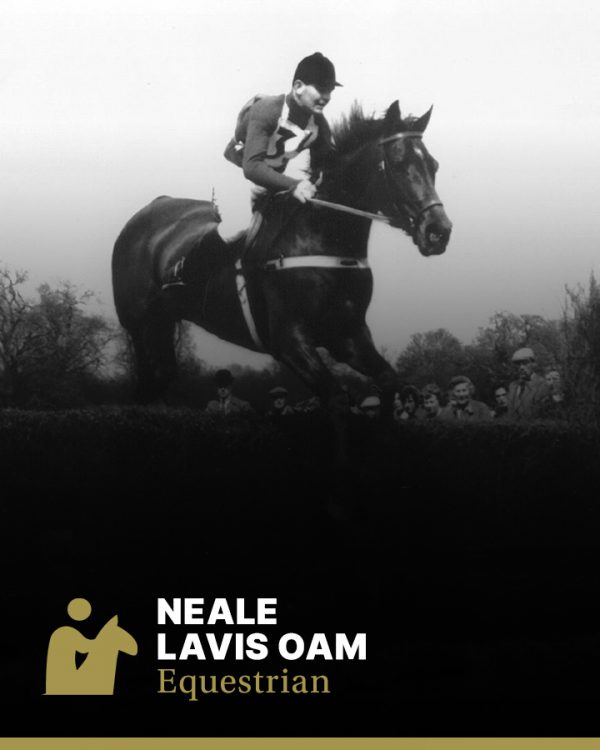 Neale Lavis was a member of the four-man Australian equestrian team that made history by winning gold in the three-day team event at the 1960 Rome Olympic Games.

It was on September 11, 1960, that three horsemen from the outback (Lawrence Morgan, Bill Roycroft and Lavis) gave Australia a new kind of Olympic glory. They came from farms to do combat with cavalry officers and fox hunters, people who had learnt their skills in formal riding schools rather than in lonely paddocks, and they brought with them horses that had been bred in the bush. They sailed with them for nearly six weeks to London in a cargo ship, flew with them to Rome, and for 20 days before and during the Games, they journeyed 142km a day to ride them. Between the three of them, those riders won two gold medals and a silver, the first Australia had achieved in equestrian events. Morgan, a grazier who had once been a ruckman with the Fitzroy Football Club in Melbourne, won the individual three-day equestrian event. Lavis, a former rodeo rider who farmed cattle, finished second to Morgan in the individual event. Roycroft made a painful journey to legend, bailing himself out of hospital with a broken shoulder and dislocated collarbone to ride through a series of jumps -enabling the team to win gold. (Brian Crago had to retire when his horse went lame in the cross country phase).

Lavis, 30 at the time, was the youngest of the Rome Olympic team. Riding ‘Mirrabooka’, named (in Aboriginal form) for the Southern Cross, he was almost faultless over the three days of competition. He bought the horse in Cooma for £100, and after the Olympics was offered £10,000 for him. Lavis replied, “No way, I’d never sell him.”

Lavis won the inaugural Australian three-day event in Sydney in 1957 and the Great Auckland one-day event in 1960. He went to England in 1960 and competed successfully in jumping, fox-hunting and team events in Surrey, White City, and Badminton.

Lavis competed again at the 1964 Tokyo Olympics without featuring in any of the medals. In later life he became involved with a cattle and racehorse stud at Braidwood, not far from Canberra, where ‘Just a Dash’ and ‘Strawberry Road’ were bred. ‘Just a Dash’ won the 1981 Melbourne Cup and ‘Strawberry Road’, the 1982/83 Racehorse of the Year, won a number of big-money races including the AJC and Queensland Derbies and WS Cox Plate in the 1983.

In 1999, Lavis was awarded the Medal of the Order of Australia (OAM) for his service to the equestrian sports as a competitor, coach, and administrator, and to the community.