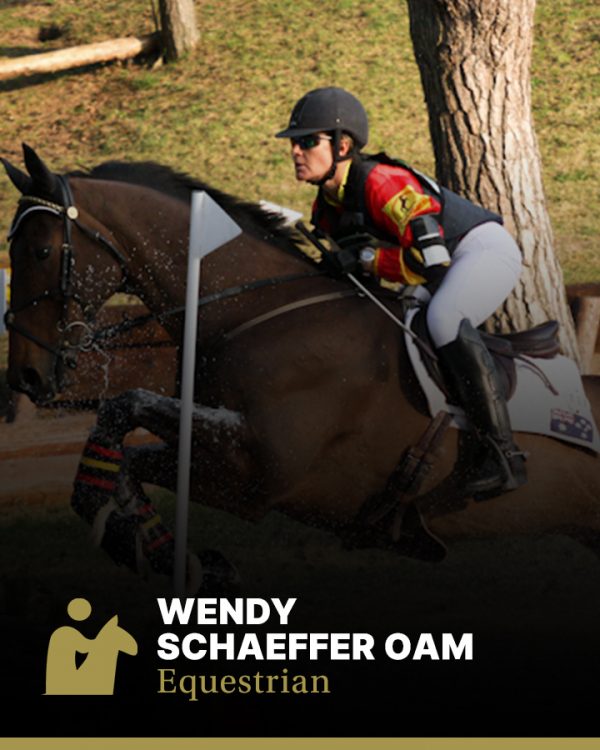 Wendy Schaeffer OAM was inducted into the Sport Australia Hall of Fame in 2002 as an Athlete Member for her contribution to the sport of equestrian.

It was her horse, Sunburst that took Wendy Schaeffer from Pony Club grade four eventing through her first Equestrian Federation of Australia Senior competition classes and eventually to the 1996 Atlanta Olympics where they won gold.

At 17, Wendy was the youngest winner ever of the Advanced Level Senior Three Day Event. Followed with selection for the World Championships, she was again the youngest competitor. She took 9th place in the Open European Championships and was the best placed first-time competitor at Badminton.

Wendy and Sunburst’s eventing performance highlights from 1989 include a number of wins at the junior level and solid performances for both team and individual competitions. In 1991, on entering the senior level, they won their first EFA Novice One Day Event class and in 1992 achieved an Advanced One Day Event win also at their first appearance at that level. That year they went on to claim first place in the Gawler 3-star Three Day Event -Wendy becoming the youngest ever winner of that event.

At just 21, Wendy became the youngest woman to win Olympic equestrian gold. She finished the leading rider in the Australian team of world class equestrians -Phillip Dutton, Andrew Hoy and Gillian Rolton. Together they became Australia’s most successful equestrian team ever.

It was her penalty-free show jumping round following her clear jumping cross-country performance that clinched the team gold medal for Australia in the Equestrian Team 3 Day Event at the 1996 Atlanta Olympics. Under the previous rules that applied up until 1992, she would also have won the individual gold medal.

The Australian team dominated the three-day event despite significant setbacks. Wendy rode her much loved horse Sunburst aggressively even though she had suffered a serious break in both bones of her lower leg just nine weeks before the games. She rode with the leg heavily strapped -a screw and plate holding the bones together.

Ranked number eight in the Sports Illustrated listing of “Great Athletes” at the Atlanta Games, part of the description to justify that ranking read: “Couldn’t walk it, but she rode it magnificently, showing the world how to cross country, in a display quite staggering for one so young. And it’s worth repeating: With…a…broken…leg”.

Wendy now lives and trains in South Australia where she manages an Equestrian services Company, ‘Sunburst Equestrian’, in order to pursue the riding and training of elite Three Day Event horses.

In 1997 Wendy was awarded the Medal of the Order of Australia for her gold medal winning performance at the Games.