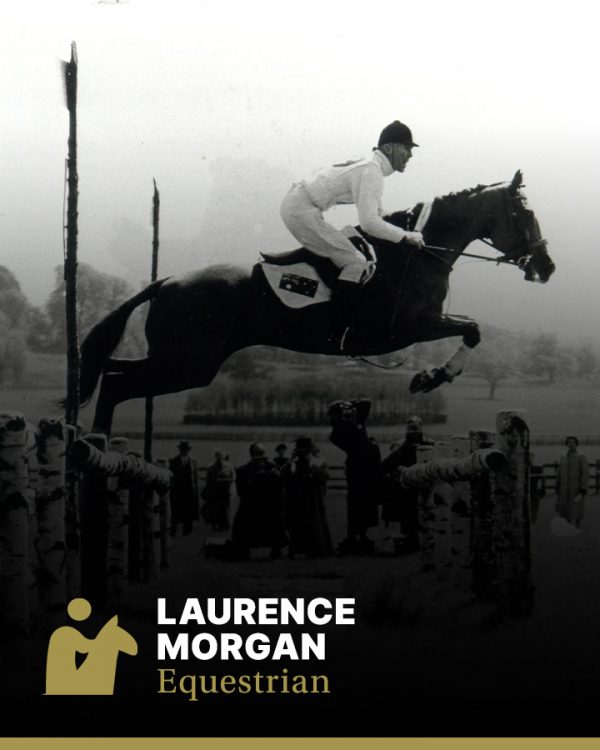 “Laurie” Morgan spent most of his early years in Yea, north east of Melbourne and is best remembered for his equestrian skills, yet he made his mark in many other sports. At one stage, Morgan held the Victorian amateur heavyweight boxing championships, and between 1937 and 1939 played 24 games as a ruckman with the Fitzroy Football Club. Morgan was also a skilled oarsman, rowing at King’s Cup level, an excellent polo player reaching nine-goal standard, and a successful horse breeder, breeding the 1947 AJC Derby winner in ‘Valiant Crown’, and the 1968 Golden Slipper winner Royal Parma.

But it was in the saddle that Morgan was at his best, winning a Badminton horse trial, four Fox Hunt Cups, and 22 of 33 steeplechase rides in England, including one ride in the Grand National at Aintree.

Morgan won two gold medals at the 1960 Rome Olympic Games in the individual three-day equestrian event and the three-day team event. He was captain of the Australian equestrian team and became the first rider in Olympic history to receive maximum bonus points for cross-country and endurance.

These were the first equestrian medals ever won by Australia at the Olympics. Morgan, an outstanding horseman, beat his teammate Neale Lavis into second place in the individual event. With Bill Roycroft and Lavis, Morgan won the team event in extraordinary circumstances.

Brian Crago’s horse had broken down at the end of the second day. Bill Roycroft had been concussed in the cross-country phase when ‘Our Solo’ had fallen on him and he was airlifted to hospital in Rome. Australia had a chance of winning with three riders needing to compete. Brian Crago’s horse could not compete, so the following morning, and against Doctors orders, Bill Roycroft checked himself out of hospital, threatening to leave in his underpants unless the Doctors gave his clothes back. Heavily treated with painkillers, unable to bend or dress himself, Bill rode ‘Our Solo’ to a faultless showjumping round to win the team gold medal.

Morgan was chosen in Australia’s six-man team for the 1964 Tokyo Olympics, but withdrew because one of his horses performed badly.

‘Gold Ross’, ‘Salad Days’ and ‘College Master’ were his three great horses, ‘Salad Days’ was presented by Morgan to the Queen as a gift from one friend to another.