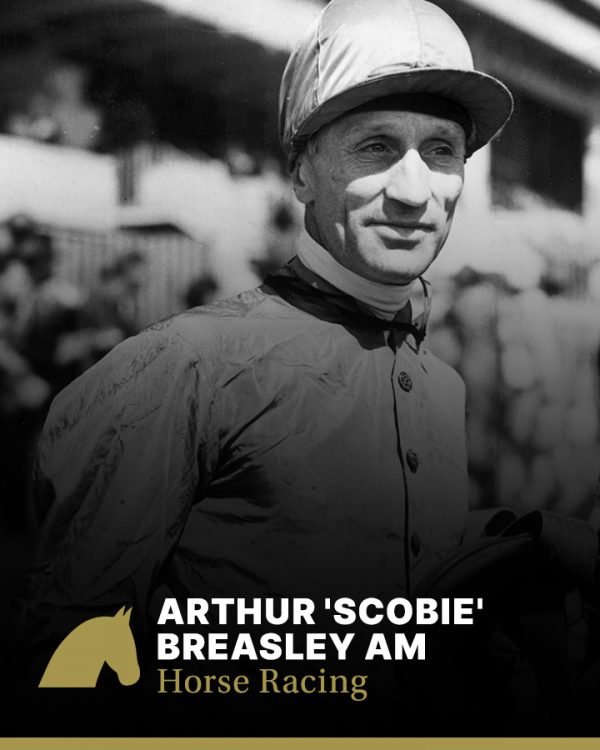 Scobie Breasley was Inducted into The Sport Australia Hall of Fame in 1986 as an Athlete Member for his contribution to the sport of horse racing and was Elevated to “Legend of Australian Sport” in 1995.

Born in Wagga Wagga, Breasley was apprenticed as a jockey in 1926 at the age of 12 to local trainer S H Biggins. His nickname was a jocular reference to the leading Ballarat trainer and ex-jockey James Scobie, whose achievements he in time eclipsed. He went on to ride 3251 winners, 1091 in Australia and 2160 overseas.

Moving to Melbourne in 1927, Breasley rode his first winner in 1928, and in 1930 at 16 years of age, he scored his first major win, the AJC Metropolitan on Cragford for P B (Pat) Quinlan.

He won the Caulfield Guineas three times, 1944 (Kintore), 1945 (Royal Gem), and 1948 (Phoibos), but narrowly missed in 1947 due to an error of judgment close to the line that later cost him a ride on Hiraji in the Melbourne Cup. Sure enough, Hiraji won that year and in 16 attempts at the Cup, Breasley could manage second on both Shadow King in 1933 and On Target in 1946.

Breasley’s graduation from star to legend came after he made a bold, almost unprecedented, career step in 1950 by taking his chances in England. He was an instant success recording more than 2000 wins in his English career, including the English Derby of 1964 on Santa Claus and a second Derby on Charlottetown in 1966 (both after he had turned 50, earning him the nickname ‘the galloping grandfather’). In 1958 he won the King George Cup and the Prix de l’Arc de Triomphe in Paris, both on Ballymoss. In 1951 he won the 2000 Guineas on Festoon and three years later in 1954 won the 1000 Guineas.

Breasley retired from riding in 1968, aged 54, and began a new career as a trainer. He won the 1972 Irish Derby with Steel Pulse before relocating his stables in 1975 to Chantilly in France until 1977. He trained in New York before moving to the Bahamas for nine years where he holds the record of four Cockspun Gold Cups, the island’s premier race. Stanford Prince won three, then Chou Chou Royale won the fourth. In 1993, he returned to live in Melbourne.

In 1996, Racing Victoria first presented the Scobie Breasley Medal, awarded on a points basis (similar to the Brownlow Medal) each year to Victoria’s outstanding jockey for the season. In 2001 he was the first person inducted into the Australian Racing Hall of Fame.

In 1988 Breasley was made a Member of the Order of Australia (AM) for his services to horse racing and is one of the few jockeys to claim that he NEVER fell off a horse.