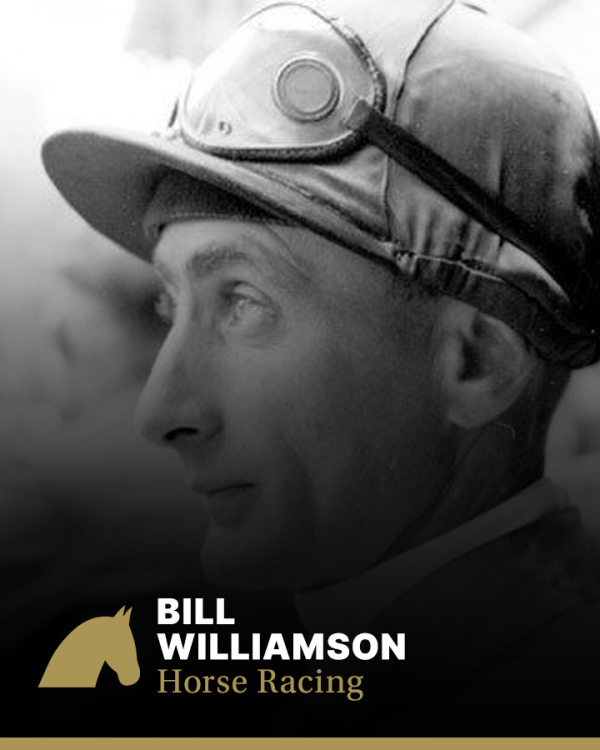 Fascinated early by horses, Bill left school at 14 and was apprenticed to the trainer F. H. Lewis. Williamson’s first winning ride was in 1937 on ‘Lilirene’ but on January 5, 1942 Williamson was mobilised for full-time duty in the Militia. He served in Melbourne as a driver with the 119th General Transport Company and as a clerk at the Bulk Stationery Store. Discharged from the army on October 30, 1944, he returned to the racetrack.

On one occasion in 1946 Williamson missed his train and had to hitchhike to a race-meeting in Albury, New South Wales. Engaged for five events at the meeting, he triumphed in all of them. His first Victorian jockeys’ premiership came in the 1949. He rode ‘Dalray’ to victory in the 1952 Melbourne Cup. His style exuded great skill, patience, and imperturbability -qualities that led to so many memorable victories.

Some of his outstanding performances include riding four successive winners of the VRC Sires Produce Stakes. He rode five winners at Flemington in October 1959, and rode four winners at Moonee Valley in June 1953, and again at Caulfield in September 1956.

He set a Victorian record in the 1953/54 season, securing the jockeys’ premiership with 67 winners, a record which lasted 18 years until bettered by Roy Higgins. In October 1954 he suffered life-threatening injuries in a fall during the running of the One Thousand Guineas and was out of racing for about nine months.

After riding successfully in Malaya in 1959, Williamson moved to Europe in 1960. Based first in Ireland then in England, he enjoyed wins in numerous important races, often in the company of three other expatriate Australian jockeys: George Moore, Neville Sellwood and Arthur ‘Scobie’ Breasley. Williamson was victorious in the Prix de l’Arc de Triomphe at Longchamp, Paris, in 1968 and 1969. The second of these rides, on ‘Levmoss’ at 50/1, drew from Lester Piggott, doyen of riders, the compliment that Williamson was ‘the best big-race jockey in the world’. He also won the English One Thousand Guinneas twice, the Ascot Gold Cup, the Irish Two Thousand Guinneas, and the Irish Oakes three times. In 1971 he rode in France for the Aga Khan.

For his entire career as a jockey, Williamson was Melbourne’s answer to Sydney’s poker faced Jack Thompson. Sleepy-eyed and laconic, Williamson was known to racegoers as ‘Weary Willie’ because of his impassive appearance, whether his races ended in victory, defeat or controversy, even his win on the 1952 Melbourne Cup on ‘Dalray’ barely changed his grim expression. His outstanding qualities as a rider were his ability to judge a horse’s pace, his patience and his sense of timing.

On his retirement in 1973 he was appointed racing manager for the Indian shipping magnate Ravi Tikkoo. Williamson returned to Melbourne in 1977 and took a position as assistant-starter with the Victoria Racing Club.