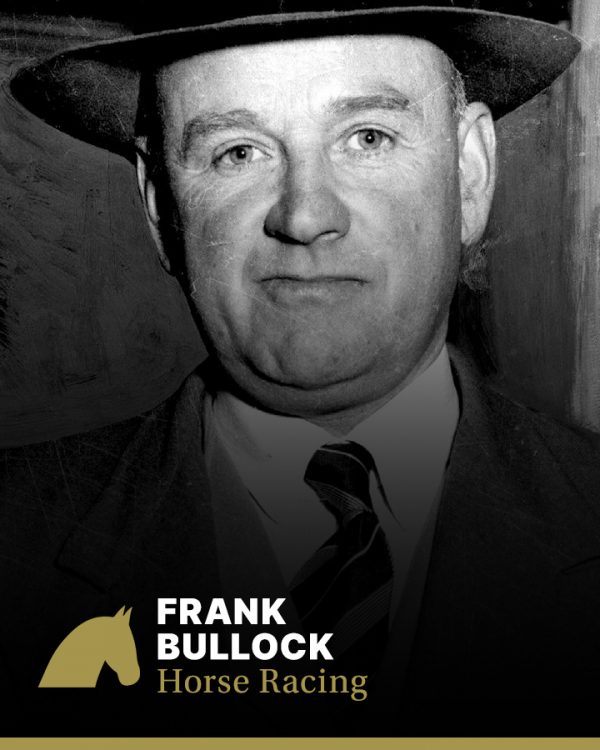 Frank Bullock was Australia’s first truly international jockey. Apart from winning Australia’s most notable races, he rode with great success in England, France and Germany, where for six years he was the number one rider to the Imperial Stables. He was the complete all-round jockey, second to none in match races, and a sympathetic rider of two-year-olds.

Winning his first race in England in 1903, Bullock dominated the racing landscape both preceding and following the Great War. He won the Melbourne Cup in 1905 on Blue Spec before travelling to England again to ride for the American trainer Andrew Joyner. During the war he worked for Reginald Day for whom he won the Jockey Club Cup in 1914 and 1915, and the Cesarewitch in 1915, on the great stayer Son-in-Law. He then had a retainer at Alec Taylor’s Manton yard, where he had his best season in 1921, when he rode a record nine winners in four days at Royal Ascot. That same year, he was runner-up to Stephen Donoghue for the Jockey’s Championship, and won the Eclipse Stakes on Craig an Eran (Bullock had won the Eclipse Stakes the previous year on Buchan). His Classic wins of 1925 were for Lord Waldorf Astor, and included the Champion Stakes at Newmarket on Picaroon.

Returning to Australia, he won the 1918 Adelaide and Caulfield Cups, and in 1919, he added another Caulfield Cup to his already impressive record. He also won the VRC Oaks in 1918.

In France in 1920, he registered a pioneering win on Comrade, triumphing in the first Prix de l’Arc de Triomphe ever contested, repeating the victory in 1922, on Ksar. With his career continuing into the 1920s, Bullock won the 1000 Guineas-Oaks double in 1925 on Saucy Sue.